'MacNeice also shared Eliot's love of music hall theatre and the music hall...the side of Eliot that danced The Grizzly Bear with Virginia Woolf (a video that we can only be glad, or immensely sad, will never appear on YouTube).'

However, instructions on how to Dance the Grizz are.
Imagine this is Tom and  Virginia.


In which yet another promised book about Bunting goes missing.

The publication date passes, and the book seller refunds my pre order because they can't tell me when the thing might actually come into existence. Might be next week, might be next year...bit like the promised Faber Collected.

What is it with these people? I can buy Ted Hughes' pointless "criticism", and not only his thick volume of letters and his door step collected, but even his correspondence with Keith Sagar.  There's a publishing industry surrounding the man: he hasn't been dead that long and a search on 'Ted hughes biography' on Amazon throws up 54 results.  54!


I want to know what Peter Makin left out of the Bunting Pound correspondence which he quotes and which I've been using,  and the only way I can do that is to go to America and shift through various collections in various libraries.

Come to think of it, this is not a bad idea if anyone wants to fund it.  I'm a medievalist by training, we are good at sifting in libraries. I volunteer to go to the USA,  search through collections, scan them all and upload them electronically as pdfs and to hell with the publishing industry. (With apologies to Bunting's insistence his letters should be burnt.)

On a less grumbling note what does it say about the reality of the poetry world if blurbs keep saying "generally regarded as one of the great British poets of the 20th century" and no publisher is willing to publish anything about him?

"Incorrigibly Plural celebrates the diversity and vitality of Louis MacNeice's writing. Poets and critics illuminate the work of a writer whose achievement and influence is increasingly recognised as central to modern poetry in English" (From the Blurb)

The reinvention, rediscovery or re evaluation of Louis MacNeice is an ongoing project and for lovers of his poetry fascinating to watch.   Peter MacDonald's beautiful "Collected’ is as much a part of it as this book of essays.  However, attempts to claim centrality and significance for his work run into two problems: the first is simply one of evidence. The second, the inevitable problem caused by multiple, contending and often hostile modern poetics fractured and smeared to all points of the compass. It's difficult to imagine any poet who could be "Central to [all] modern poetry in English".

He wrote one of my favourite poems, the first poem I consciously learnt by heart for no reason than the pleasure of it in about 1975. I’d take him over Auden any day of the week.  But a quick shift through the books on hand provides the following standard readings:

A thirties poet, a school boy poet,  a name tacked onto a list that started “Auden, Spender, Day-Lewis…” as though he wasn’t quite as important or as interesting as the others or wasn’t distinct enough to make it on his own.

There is no mention of him in Kenner’s “The Sinking island” although the thirties get their own chapter. Nor does he rate a mention in “A Colder Eye: the Modern Irish writers.”  Rosenthal and Gall don’t discuss Autumn Journal but they don’t do  The Great Hunger either.

Typical of most surveys is MacNeice’s  appearances in Michael Alexander’s “A History of English Literature”: a name in a group (without him the MacSpaunday jibe doesn’t work): ”Day-Lewis is remembered for his versions of Vergil. He became Laureate in 1968, and Spender was knighted for services to literature. Isherwood was clever, MacNeice talented, Auden Major.”  Though he does get a whole sentence to himself: “MacNeice wrote an open, journalistic, colloquial verse of his own, notably in Autumn Journal  about 1938-9).” But this sentence leads off a two page section on W.H.Auden. (It’s more than Bunting gets: he doesn’t even rate a mention).

He is always either qualifying a discussion of Auden or lurking in the background.  Michael Schmidt gives him four pages in The Lives of the Poets  and his summing up seems judicious even if it seems to suggest that he is worth reading for his control of rhythm.  He describes him as “Kavanagh to Auden’s Clarke”.

In the Cambridge Introduction to Modern Irish Poetry he shares a chapter with Clark, Colum and Kavanagh…which goes to show how hard he is to pigeon hole.  And while Autumn journal gets some praise here it’s the kind of “however” praise that can bury its subject.

The link to Kavanagh, at first so odd, is perhaps not as inappropriate at it seems; both poets’ “Greatest hits” would sit easily with any other poet’s in the twentieth century and both wrote a great deal that strains the reader’s good will.

Michael Longley’s claim that MacNeice wrote some of the best love poems in English is a hard one to argue with, and I’d add  Autumn Journal is probably one of the few successful long poems of the twentieth century. Granted a different type of long poem, with more in common with The Great Hunger than the Cantos. But endlessly rereading Peter MacDonald’s edition of MacNeice’s Collected Poems there’s a sense that there’s a lot there that doesn’t live up to the highlights.

So this new book is interesting firstly for its claim which seems mostly unsubstantiated. That people turn up to a MacNeice centenary doesn’t really prove a great deal and showing that Phillip Larkin was influenced by him is hardly going to win friends and influence people.

Having said that, this is a fine collection of Essays. Old fashioned literary criticism is thankfully not dead and pseudo Derridean syntax not the only game in town:  the writers, having something worth saying about poet or poem, are at pains to covey that insight to the reader in clear prose. Good literary criticism sends you back to what you thought you already knew to look at it again.  Peter MacDonald's essay on "Cradle Song for Eleanor", which leads off the volume, is worth the price of admission.  Edna Longley compares two 'Classicists', MacNeice and Graves and mines the Juxtaposition, while Glyn Maxwell does a fine reading of 'Autumn Journal' and finishes his essay with a succinct explanation of why 'Autumn Sequel fails'. He does it in one sentence.

Scattered amongst the longer essays are shorter pieces: a short 'memoir' by Dan MacNeice, Derek Mahon describing two meetings with Louis, modern poets writing briefly about what MacNeice means to them.   And an essay by Paul Muldoon.  Anyone who has read 'To Ireland I' will know exactly what to expect. Surrounded by the other essays, the Muldoon’s familiar pyrotechnics look too much like smoke and mirrors. And I would have traded it for a longer essay by Derek Mahon.

So this is a book of good essays, and like fine books of literary essays will reward rereading. I don’t think it matter if MacNeice was “central to Poetry in English” or not.  Like most similar claims it invites too many disagreements and nudges towards being silly.   But this book does him the tribute of taking his work seriously and prizing him out of “Macspaunday”.

And, given the subject, there’s also humor in the writing and the sense that the poems and their author belonged in the real world, not in the library.  In an essay called: "The ladies will say he looks like a poet; Tom and the selling of Louis', Ann Margaret Daniel traces Eliot's dealings with MacNeice.  She exposes the subtleties of the relationship without needing to overstate anything.  Those of us who have to stop occasionally and remember how many ts Eliot stuck on his surname will feel reassured by the fact that he consistently seems to have misspelled 'MacNeice'.

Discussing their similarities she writes:

'MacNeice also shared Eliot's love of music hall theatre and the music hall...the side of Eliot that danced The Grizzly Bear with Virginia Woolf (a video that we can only be glad, or immensely sad, will never appear on YouTube).'
Posted by Liam Guilar at 4:23 PM No comments:

"To reach the moon you need a rocket": Tom Pickard Interview

http://www.3ammagazine.com/3am/tom-pickard-interview/
Posted by Liam Guilar at 8:35 AM No comments: 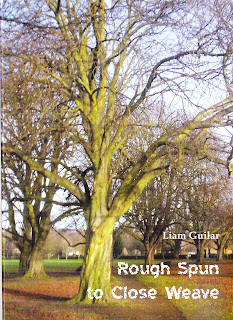 To be launched at the AAWP Conference in Geelong this November, and available from Ginninderra Press: http://www.ginninderrapress.com.au/

( Originally if you searched for Guilar on their website the search engine asked if you were looking for "guilt". The search will now take you to the book.)

Posted by Liam Guilar at 1:44 PM No comments: