This is the final post of three about Jeremy Hooker's The Release. See the previous two posts for a general introduction and a discussion of the prose journal component. 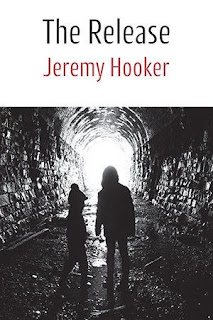 as a shadow chases cloud

as a clod springs up

as thought from the lamed body

as word leaps to lips

One tempting manoeuvre for the bemused reviewer is to slip into a discussion of ‘What the poems are about.’ Cue memories of English classes and the teacher demanding ‘What is this poem about.’ ‘What do you think the poet is trying to say?’ Even if I thought those questions were worth asking, and outside the classroom I’m sure they are not, they are made redundant in The Release by the prose.

The prose is a journal, as such there are parts of it that are personal: memories, the absence of a loved one, lists of names who visit or call that mean nothing to someone who doesn’t know them. An honest journal cannot avoid what Lewis called ‘privatism’. But the poems, while produced by the experience and the concerns, float free of their circumstances and stand alone as achieved works of art.

This distinction is fascinating, not only because it seems to answer one of Hooker’s own questions: how to be a lyric poet and not be a poet who parades his own ego as subject matter. Perhaps the metaphor which allows me to get closest to what I think is happening is the idea of windows, which runs through the prose and then becomes a poem which ends:

Truly we owe thanks

to the art of the glazier

which lets the outside enter

and the inside reach out

driving back the dark.

A man in a room, living his life, his memories, concerns, interactions, connected to the world allows the outside to enter. That’s the prose. But he’s looking outwards, and the poet practises the art of the glazier, letting the outside enter, but shaping it as poem, as objects to illuminate the dark. They capture bright moments of seeing.

Metaphors are always inexact, therefore two quotes to qualify this image. The first is from Hooker’s tribute to R.S Thomas.

We have heard his voice.
It will not be unheard.

We have looked with his eyes.
What he has seen
will colour our seeing.

It’s so very apt for R.S.Thomas, but I’d conscript it to describe Hooker’s best poetry. I live by an estuary and every gull on a post evokes Hooker’s poem of that name in his Selected Poems. The two seagull poems in The Release do the same thing. The everyday is presented in a way that is accurate as observation, but shaped in a way that invites the reader to look again. You’re being offered a glass to look through that frames the object. If you live on the coast no poem can make you see sea gulls ‘for the first time’, that’s nonsense. But a poem can colour the way you see them.

As for style, it’s not easy to talk about a poetic that leaves out the tricks of the modern poet yet delivers far more than the simply declarative. The best way to illustrate Hooker’s style would be to reprint the book here.

As that is not possible, another useful quote, this time from Briggflatts, where Bunting is praising Domenico Scarlatti. Initially it might seem strange to link Scarlatti’s fifty-five notes to a bar ripple and rush with Hooker’s uncluttered poems. Bunting first, then Hooker.

It is now time to consider how Domenico Scarlatti

condensed so much music into so few bars

with never a crabbed turn or congested cadence

never a boast or a see-here, and stars and lakes

echo him and the copse drums out his measure

snow peaks are lifted up in moonlight and twilight

and the sun rises on an acknowledged land.

First, they were voices

familiar to me, but

I felt it was the sea

they were crying for

the element that mothered them

theirs was the voice

that troubled my cradle.

In age, it returns

with the night wind,

the beginning, promising the end.

No pyrotechnical ‘see here’, no congested cadence of jumbled syntax, no boastful ‘Look at the vocabulary I pillaged from the thesaurus’ or ‘Be impressed by my references to things you’ve never heard of?’ Hooker writes well. It should be the highest praise.

In the prose, he writes about art as conversation, and the poems have a conversational tone only someone who is tone deaf might think artless. However, Art as conversation means more than just tone. It’s difficult to explain. You know it when you read it and the effect is complex and profoundly satisfying.

If the poet and the man in the hospital bed are the same man, unified not just by a shared flesh but by an intelligence that refuses to split them, a particular kind of intelligence which takes the world in and shapes it into verbal patterns, then it follows that the poem and the world it describes are not separate.

The poem isn’t the world. It cannot make the sunrise or be the sun. And the sun cannot care for the poem. But the poem can acknowledge the world, frame it in a way that invites looking, and simultaneously situate both writer and reader in it.

The last three lines of the Bunting quote get at this in a way that I can’t verbalise.

The magic of the effect of an honest poetry in dialogue between the poet and the world and the poem the reader and the world lies in a complex of ideas clustering round that word ‘acknowledged’.

echo him and the copse drums out his measure

snow peaks are lifted up in moonlight and twilight

and the sun rises on an acknowledged land.

Hooker’s ‘Selected Poems’, along with Maurice Scully’s ‘Things that Happen’, would have had my votes for outstanding poetry publications in 2020 had there been votes for such a thing. They are very different poets, but equally admirable. The poems in ‘The Release’ move on from those in the Selected with no loss of quality. Here’s hoping there will be more.

Until then, buy ‘The Release’. And Hooker’s ‘Selected Poems’. And while you’re at it, buy Scully’s ‘Things That Happen’ and enjoy contemplating how two excellent poets can be so wildly different.

Posted by Liam Guilar at 7:52 PM No comments: