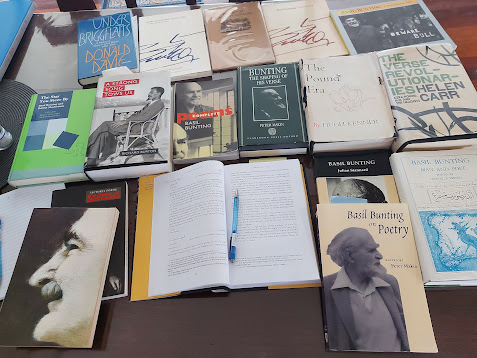 My Review of The Letters of Basil Bunting, selected and edited by Alex Niven, is now up on the Brazen Head. You can read it by clicking on this link.

(I started pulling books of the shelf when I was writing the review, checking what I thought I knew, the pile of books became ridiculous, so I neatly arranged them for a photo. The joke's on me.)

Posted by Liam Guilar at 7:51 AM No comments:

Publication; Chapter eight of the story of Vortigern. 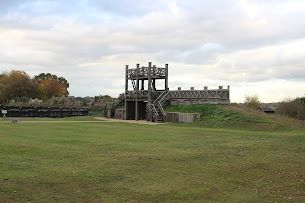 A QUEEN IN THE WILDERNESS.

Chapter eight of my story of Vortigern, is online at the Brazen head.

The full story will be published as A Man of Heart, (Vol 2 of A Presentment of Englishry) by Shearsman Press, UK, in early 2023.

Posted by Liam Guilar at 9:25 AM No comments: 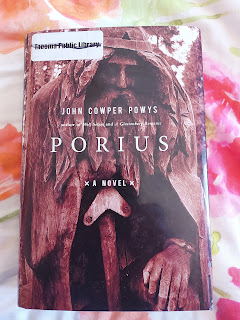 Rereading this, I'm struck by how successful Powys was in creating a fictional world set in the past. A small corner of what is now Wales, in the 5th century, is strange and believable. The traditional feuds and resentments woven into the story and its background,  interact with the characters of the participants to drive the story, though drive is probably too dynamic for a story that moves at its own pace.

His ability to create multiple sub plots, and people them with interesting characters, is evident in other novels, like A Glastonbury Romance and Wolf Solent, but in Porius what is most impressive is Powys' ability to suggest that the people of the 5th century lived differently in the world, thought differently, understood themselves differently. He may not be historically correct, there's no way of knowing, but in Porius he created a convincing 5th Century Prince who is not a modern man dressed in funny clothes, bereft of modern technology.

Compared to most modern fiction pasted into the past, it's in a class of its own.

Rereading this, I'm also struck by how good it is.

Posted by Liam Guilar at 3:23 PM No comments: