'Ruins', the story of Vortigern, is published in Long Poem Magazine spring 2020

'Ruins' is a long poem, 7 pages long, which tells versions of the story of Vortigern.

In the 6th century, the remnants of a broken army, fleeing for the Welsh hills, find shelter in a ruined villa. To get through the night they tell the story of Vortigern and the Fall of Britain. But they have also found an old man hiding in the ruins, and he is adamant that he was a participant in the story they are telling. His version of events does not agree with theirs. 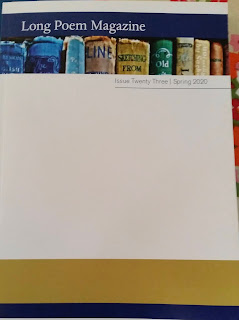 For someone interested in stories and storytelling there was so much to play with.

Although written to stand alone, 'Ruins' is the overture to a full length story of Vortigern, which will follow on from 'A Presentment of Englishry' (Shearman 2019).

You can hear a reading of an earlier attempt at this here: The poetry voice Podcast
Posted by Liam Guilar at 3:31 PM No comments:

Strangeness and Power: Essays on the Poetry of Geoffrey Hill

Strangeness and Power: Essays on the Poetry of Geoffrey Hill
Edited by Andrew Michael Roberts.

The common response to the poetry of Geoffrey Hill, acknowledged by the contributors and editor of this volume, is that Hill’s poetry is ‘Difficult’. Most readers, encountering his poems for the first time, would admit to their ‘strangeness’, though many might question their ‘power’.

The blurb  claims that Hill was ‘by common consent one of the finest poets in the English language in the second half of the twentieth century and early years of the 21st’. ‘Common Consent’ erases his many critics and detractors but flags the writers’ assumption in this volume that whatever they write that might suggest the opposite, Hill was a great and important poet.

What characterizes this volume of essays is this odd paradox: the authors acknowledge the problems readers face. Several of them lay out a detailed explanation of why readers might not be impressed or convinced by aspects of the poetry. At the same time, this does nothing to shake their faith that he was a great or an important poet. In presenting the ‘case against’, they do such a good job that the assumption of his greatness seems ever more fragile.

In any general collection of essays on a single author there should be a core of essays of interest to any reader of Hill’s poetry, and then a few for those with more specialised interests. This book meets that criteria successfully.

Of the more specialised studies, the aptly named Tom Jones takes on Hill and the eighteenth century  while Steven Mathews explores the relationship to Eliot and Jones.

There are other ‘specialised essays’ on Hill’s relationship to Denise Riiey and J.H. Prynne, his affinities with ‘Radical landscape Poetry’ and studies by Natalie Pollard and Samira Nadkarni of ‘Materiality and design’ and ‘Speech! Speech!’ respectively.

It’s a fine spread of essays.

Before I read this collection, I would have counted myself amongst the admirers of Hill’s work. That admiration is qualified by my inability to see the value of the Day Books, but up to the publication of Clavics, he was the only living poet whose publications I bought as they appeared. The essays I read left me far less certain about Hill’s achievement.

For example, Martin Dodsworth tackles the problem of Hill’s difficulty. This is an honest attempt to confront the problem most readers face. With the (probably unknown) ghost of C. S. Lewis looking over his shoulder[1]  he identifies three aspects of Hill’s difficulty for the reader: allusiveness, indefiniteness of relation, and ambiguity, pointing out there are others.
Choosing a poem to anchor his discussion of allusion he does a masterly unravelling of allusion, but demonstrates convincingly that even when the allusions are explored and explained, the poem doesn’t become any more clear than it was two pages earlier when it was quoted.

As Dodsworth’s essay unfolds, his scholarly explanations seem increasingly at odds with a different response. Compare the first two sentences of this summing up of the first part of the essay with the third sentence. The first two sound like a Professor performing a poetry reading.
‘The reader follows the poet in searching for meaning within the language of the poem and within the world to which language is a mode of access. In this search, bafflement signifies failure, but also a kind of success, that of a sustained attempt at truthful utterance. Some readers however, may with reason, find this success difficult to accept.’ P185

The status of these unidentified readers, and their justifiable reluctance to accept the value of the poems, is acknowledged but brushed aside.

What is perhaps disturbing about this essay, which runs from p174-202,  is that having presented such a convincing ‘case against’ the value of the ‘difficulty’ he discusses,   Dodsworth does not balance the argument. Instead he writes:

At one or two points, this essay had suggested a resistant response to one aspect or another or the poems, and sometimes to a poet whose sense of the poetic invitation is often absent and (implicitly) to a nascent expository tradition that has too much of the inert about it. But it would be wrong to conclude without acknowledging that Geoffrey Hill has a place amongst the greatest of our poets……I should like to conclude with a list of some of the poems and volumes for which I am most grateful…….These are justification for Hill’s difficulties.[2]

If ‘At one or two points’ is understatement, then in terms of an essay collapsing into itself, this ending is a positively stellar implosion. After all the careful exposition, the justification of the difficulty, promised at the end of the first paragraph of the essay, is a list of the writer’s favourite poems.

The best essay in some ways is Mathew Sperling’s short discussion of Hill’s relationships with his publisher. It doesn’t do him any favours either, he obviously had a very high opinion of himself from the start, but it does open an interesting window on Hill’s attitudes to his own work and reputation.

I bought this book specifically for Steven Mathew’s Essay ‘Felt Unities’, on Hill, Eliot and Jones.  Jones has 1 entry in the index to Hill’s collected critical writings, in which Hill lists Rosenberg, Gurney and Jones as ‘three of the finest poets of that war’. While Rosenberg and Gurney get a full essay each in the CCWs, there is nothing else about Jones.  I was intrigued by this.

I’m not in any position to critique Professor Mathew’s argument, and I’m sure I’ll be reading this essay for some time, but it did send me back to reread Mercian Hymns. Having recently been stuck in quarantine rereading ‘The Anathemata’, the result of rereading Mercian Hymns was surprisingly unpleasant. Beside Jones, Hill suddenly seemed lightweight and self-regarding.

I was startled the first time I wrote those last two sentences because they were so unexpected.

For all the ponderous seriousness of Mercian Hymns: ‘Then is now’, but so what? Against Jones’ intent, scope, and subtlety, reading Hill’s work is increasingly an exercise in over hearing someone talking to himself, and my presence as reader becomes increasingly redundant, except to applaud another performance.

This was not what I had expected.

It made me think of several of his critical essays, where I have the feeling that G. Hill is wrestling with the problems of communication while working out his thoughts on the topic. Which is what a first draft can often be. I wish, perhaps naively,  that he’d finished the wrestling match and discovered what he’d been trying to say in the draft, and then written a final copy which was as close to what he wanted to say as he could get. Too often it’s like listening to a medieval historian writing about the difficulty of accessing a manuscript and the difficulty of reading it, without ever getting to the point of saying what she learnt from the manuscript she had been struggling to find.

What also hangs over this collection is the vexed problem of the Author Function. Would these critics give so much time to an anonymous poet if he or she produced poems which can be so easily and thoroughly criticised on so many counts? The answer is obviously no. The evidence goes one way, but the conclusion, which was also the starting point, remains unaltered: Hill is a great/important/ fine poet. But no one takes on the task of explaining what was so great/important/fine about his work.

If a good book of critical essays should send you back to the subject of the collection and see him or her or it in a new light, this one is highly successful.

It also raises some fascinating general issues, not least the whole problem of obscurity, intentional or otherwise.  Which would lead back to C. S. Lewis.

[1] In his Conclusions (chapter vi) to ‘Williams and the Arthuriad’ in ‘Arthurian Torso’ (1948), a piece known to David Jones. Lewis’s ‘Conclusions’ is fine example of a critic trying to explain why he thinks a poet is good while mapping out different types of ‘obscurity in modern poetry’.
[2] The body of the essay is followed by two dated post scripts, postscript 2017 and post postscript 2019 respectively. One wonders what professor Dodsworth would think of a student who treated essay writing as live performance and didn’t simply rewrite the first draft to bring it in to balance and focus.

Posted by Liam Guilar at 9:42 PM No comments: