With the centenary of the First World War comes an inevitable reappraisal of the poets of that conflict. Graves’ position as a war poet has always been tenuous. Although Goodbye to All That may be one of the indispensable prose works about the war, Graves’ poems written during the war have never had many advocates, even amongst those who admire his later poetry. It’s difficult to disagree with Douglas Day’s assessment. The chapter in Swifter than Reason which discusses the poems printed here is called ‘Juvenilia and the War’ and ends: ‘If Graves’ poetry of this period suffers from the inevitable naiveté and enthusiasm of youthfulness, it is also hindered by being attached to a worn-out tradition’.

Mundye is well aware of the criticisms. If he doesn’t meet them head on, he argues a case for the poet and his poems:

The poems themselves are expressive of contradiction, often resolute, fearful, absurd, ironic, knowing, ignorant, and elegiac in isolation and combination. Graves gives us reassurance and terror; friendship, murder, and slaughter; graphic realism and escapist fantasy, and more and more the sense of any simple division between such categories collapse, as they slowly bleed into each other in intensifying and metapmorphosing nightmare (p.45).

This collection brings together, for the first time in one edition, all the poems Graves wrote during the war and then those he wrote about the war in the course of his long writing life. In doing so it gives a reader the chance to see those poems as a coherent whole. Throughout his long career Graves was a great reviser and deleter of his own poems.  Mundye prints them in their original form.

The book probably isn’t going to elevate Graves into the canonical ranks of ‘War Poets’ but at least it becomes obvious why that’s not going to happen. The poems record the collision between a young man whose upbringing had not prepared him in any way and the experience of that first fully mechanised war. Geoffrey Hill, in one of his Oxford lectures has described the error of taking highly eloquent personal testimony and generalising from it. But in Graves’ case, it is difficult not see him as a representative of a public school generation who went from games and prep and worrying about the legitimacy of same sex friendships to finding themselves as junior officers in the trenches leading men much older and with much more varied experiences.

Read in sequence the first three collections, ‘Over the Brazier’, ‘Fairies and Fusiliers’, and the hitherto unpublished ‘The Patchwork Flag’ are far more disturbing than the more well- known poetry. They are the work of a painfully young man. By all accounts, his own and successive biographers, Graves was an awkward, unhappy school boy who didn’t fit in at Charterhouse school. If the public school system was there to provide the empire with manly stalwart chaps, Graves’ was a flawed product. Like many of his class and generation he went straight from school to the army and joined up just before his 19th birthday. He was (prematurely as it turned out) declared dead on his 21st. Mundye gives the biographical information though without the details of the intense complexities of Graves’ adolescence.

Some of the poems printed in ‘Over the brazier’ were written while he was still at Charterhouse school. They read like school boy poems. Edward Marsh, who Graves was introduced to by George Mallory, himself an unhappy presence at Charterhouse, said they read like poems from the 1860s. When Graves went to France he took the everyman Keats with him. Some of the poems in ‘Over the Brazier” were written in that book and the malign influence of Keats is evident in some of the poems.

In ‘The Dying Knight and the Fauns’, which Mundye suggests was written about 1910,  the poet sees the dying knight:

It’s formally good but the adjectives and adverbs are as heavy handed as the sentiment, as in Jolly Yellow moon with its refrain:

It took Graves a while to get rid of the oh gosh and golly how lovely diction. But at the same time, Graves’ technical control is there from very early on. Fairies and Fusiliers performs a strange split: literally poems about Fusiliers and poems about Fairies. Presumably Graves expected his fellow officers to read his poems. Sassoon wanted more Fusiliers and less Fairies. He accused him of not feeling deeply enough. But I think in this Sassoon was wrong.

For Graves menace is never a character off stage waiting to make an entrance. The enemy in the trench on the other side of no man’s land is not as dangerous as having to live with yourself in a dug out. Menace is woven into everything. As Kersnowski demonstrates in The Early Poetry of Robert Graves, it tends to ripple through everything. By the time he wrote Poetic Unreason in the 1920s,   Graves came to see that meeting that menace and dealing with the trauma it caused was the therapeutic function of poetry for the poet.

Mundye’s introduction is good at identifying what is unique to Graves.  The first poem in Over the Brazier, ‘The Poet in the Nursery’, describes a child pulling down a book of nursery rhymes and becoming obsessed by them. At the same time as the immature Graves pads his lines with unnecessary adverbs and adjectives and inverts word order, some of the characteristics of his later verse are already present:

The book was full of funny muddling mazes
Each rounded off into a lovely song
And most extraordinary and monstrous mazes
knotted with rhymes like a slave driver’s thong.

That final simile might be a young man losing control of his matter for a rhyme, but the abrupt contrast between ‘lovely song’ and ‘slave driver’s thong’ is an early example of the way Graves acknowledged that what is terrifying and threatening can also be attractive. And vice versa.

Part of the reason for Graves’ absence from the pantheon of ‘War Poets’ is that his poems don’t fit neatly into an ‘attitude’ which can be conscripted into someone else’s purposes. As Mundye points out, he wasn’t a ‘protest poet’. His reaction was much more varied. There are  ‘anti-War poems’. 'Armistice Day, 1918' is a good example. But he was proud of his regiment for the remainder of his life. This was the man who told Wilfrid Owen to cheer up and, criticised by Sassoon for being young and lacking depth of feeling, responded that he was young. (Both quoted by Mundye.)

It’s possible to argue that the poems of Sassoon and Owen describe the world they saw for those that weren’t there. It’s a journalistic approach to the horror. Graves on the other hand, records the effects of processing that horror. The nightmares, the ghosts that appeared, the dead friends in the crowds. It’s too neat a distinction to be pushed too far, but it’s workable.

“The Patchwork Flag’ was never published, and its publication here might seem like reason to buy the book.  However, if you think you’re going to read a hitherto unseen collection of Graves poems you’ll be disappointed. Although Graves decided not try and publish the collection, almost all the poems in it were later published.

On the other hand, as Mundye argues, the poem that would have been the foreword to the collection sums up Graves poetry at this time:

Here is a patchwork lately made
Of antique silk and flower brocade
Old Faded scraps in memory rich
Sewn each to each with featherstitch.
But when you stare aghast perhaps
At certain muddied khaki scraps
And Trophy fragments of field-grey
Clotted and stained that shout dismay
At broidered birds and silken flowers
Blame these black times; their fault, not ours.

They are a patchwork. Summing up the case for his subject Mundye ends:

His Charterhouse poems in Over the Brazier are an unsuspecting gateway to hell: the domesticity of his later patchwork metaphor is a brutal reminder of how early family life for a whole generation was punctuated by shell-shock memory of blood and fragmentation. As Blake before him, Graves explores both innocence and experience, with the complex interconnectedness of the two bringing out the terrors of the latter all the more clearly.

In discussing the poetry written by men and women who lived through times most people are grateful they never had to endure, there’s a humane tendency to shy away from discussions of quality. It takes someone of the stature and bloody mindedness of Yeats to say the unspeakable and point out that Owen’s poetry, as poetry, is not always good poetry. Graves’ war poems, with a few exceptions, are not well known because they are not memorable. While Day probably over stated the case in the chapter mentioned above, his judgement still seems broadly correct. These are a very young man’s poems and they are written out of a tradition that was out of date before he was born.

If you have any interest in Graves the poet the book is probably indispensable. Mundye’s essay and notes are worth the price of admission. The book probably needs to be read against On English Poetry (1922) and Poetic Unreason (1925) which are Graves' attempts to achieve some kind of critical distance on his experience.

But if you’re not interested in Graves, then I don’t think the book stands alone as a collection of poems worth knowing. On the other hand, if you’re intrigued by the question: what would it have been like to be a young infantry officer in the 1st world war, then the unsettling patchwork of these poems offers an unsettling answer.
Posted by Liam Guilar at 10:12 AM 4 comments:

The Battle of Maldon

Or
'In search of the Battle of Maldon'.
I've written other posts about the poem. I've wanted to see the place for decades. 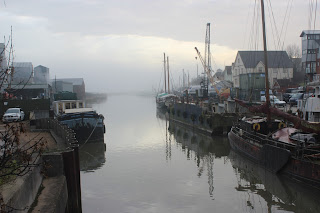 Maldon itself, suitably atmospheric at low tide. The battle field is badly signposted, and I didn't trust the map to drive there, but on foot, one simply follows the Blackwater downstream from the town, pausing at the relatively new statue of Byrthnoth. 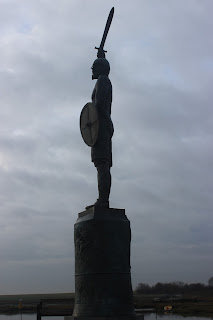 Given how memorable his speech to the messenger is, it seems odd that the words that adorn the plinth are a fragment of a prayer. 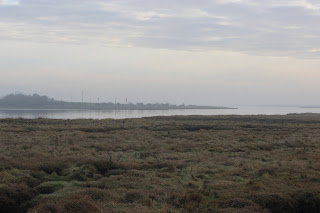 Along the sea wall to Northey Island, which is now a nature reserve. 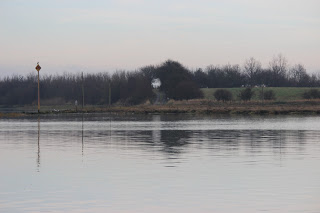 At high tide the causeway is under water. It's not difficult to imagine a Viking host lined along the island, waiting for the tide to run out. Not sure I can imagine the Viking Herald calling a coherent message across that distance. Things may have changed in a thousand years, or he may have been rowed into earshot. 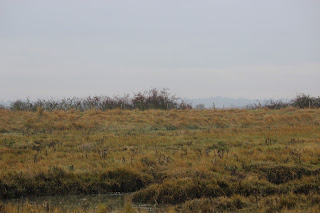 Looking inland from the River bank, where the English host must have stood, and died. It's a bleak spot. Even if it had no history it would be difficult to avoid the word 'dreary'. There is little marking the battle field, except a strange paragraph in the information for the bird reserve which mentions the battle and calls it the earliest recorded battle in Britain. Or England, I was too surprised by it to take a photo or remember the exact wording. There is supposed to be a commemorative plaque but I didn't find it. 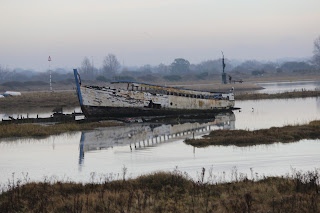 Posted by Liam Guilar at 3:24 PM No comments: