For anyone wanting an intelligent overview or an introduction to Bunting's life and work this is a good starting point.  Gunn was convinced both of the quality and importance of Briggflatts, and the stature of Bunting as a poet.  He does a good job of explaining why the thought so. You can listen to the whole lecture by following the link below.

If I were going to quarrel with him, since cats can look at Kings and even argue with them, I'd say he overrates Pound's influence, as everyone else does, and I wouldn't rate Canto 47 so highly. I don't think Pound got close to writing something equal to either The Waste Land or Briggflatts. I don't even think he could have written something like Villon.
Posted by Liam Guilar at 1:17 PM No comments:

Peter McDonald's Lecture to mark the 2015 launch of Pn Review.

Notes from a provocative  lecture by Peter MacDonald. The text is in the current edition of PN Review but you can hear it at the link below. I hope I'm not misrepresenting his argument by quoting bits I want to keep for my own consideration.

He begins with a discussion of Yeat's famous quote:


We make out of the quarrel with others, rhetoric, but of the quarrel with ourselves, poetry. Unlike the rhetoricians, who get a confident voice from remembering the crowd they have won or may win, we sing amid our uncertainty; and, smitten even in the presence of the most high beauty by the knowledge of our solitude, our rhythm shudders.

'the work [Per Amica Silentia Lunae] was written when Yeats was fifty-one, and published when he was fifty-two years old. He had been publishing poetry since he was nineteen years of age, and critical prose since he was twenty-one, so his statement here has a good deal of time and experience behind it. Yeats by this time knew a few things, that is to say, about both poetry and quarrelling'.

Macdonald  goes on to observe that most people quote the first sentence and not the second. He doesn't point out that the number of readers of Per Amica Silentia Lunae must be very small or that Yeats can spin the word 'self' through enough sub devisions to confuse most readers. But for Macdonald, the key point is the role of uncertainty and disagreement. An uncertainty and disagreement which he sees as lacking in both modern poetry and criticism:

'Yet amid all the noise of the tenured ‘explainers’, the professors and the poet-critics and the critic-poets at work here, there, and everywhere in a booming university system that makes good money from the humanities, Bishop knows exactly what is never being mentioned:

The trouble is – excuse my clichés – as people grow older, non-artists, that is, they do have to steel themselves so much, forget so much and try to pretend that everything’s all right so much. They are afraid, probably rightly, that poetry – any art – if they take it hard, might upset them – so they pretend they like it while at the same time they resist it absolutely.

'Fifty-two years later, this is one of those truths which remains unsayable; to air it now – whenever, say, yet another anthology makes its marketing pitch on the promise that poetry can change your life for the better – would be understood simply as quarrelsome, the work of an elitist, a spoiler, or (at best, and condescendingly) a useful gadfly. Yet it is a great poet writing to another great poet; I myself think that what Bishop says here is true. If people really understood most poetry, or understood what it takes to write most true poems, they would be shocked rather than inspired. The truth is, everything is not ‘all right’; and real poetry tells this truth. Few creative writing courses, it is fair to say, have been founded on such a premise; nor does it sell many books, or make many careers'.

If the new proposed Australian literature syllabus is anything to go by, we will continue to teach students to 'resist it [literature] absolutely'.  We will churn out passive users of second and third hand opinions  and reward them for telling us what they think we want to hear.  Exactly why we're doing this remains the overwhelming question which no one seems to be bothered to answer.

Looking at the state of institutionalised literary studies, which seem to be on shaky ground at present he comments:

'The humanities, on both sides of the Atlantic, may be making a lot of pained noise at present; but the essence of their complaint is that they are not loved enough. It would seem never to have occurred to the most vocal mourners that their disciplines did not come into being in order that they should be loved; nor indeed that the society from whose instinctive values (including the values that attach to tradition and art) they have declared themselves so completely apart, and to which they remain in their own estimation so insistently superior, has truly no obligation to show them its affection.

When what were once disciplines of thought and study conceived and practised in terms of disinterested knowledge decide that their success is measured by prestige, peers, and patronage, and that their prime task is to ‘interrogate’ their own past, along with the past and the present of their fostering societies, and their fundamental shared values of aesthetic, social, and civil traditions, then they have no right to be surprised when those who foot the bill tire of their interrogations, and ask some hard questions of their own'.
Posted by Liam Guilar at 11:39 AM No comments:


File it under private victories.

Two poems accepted for PN Review is victory enough; one 'Waiting Broken Echoes Fading' a poem I've been tinkering with for probably a decade, the other  a version of Wulf and Eadwacer an Old English poem that I first tried translating when I was an Undergraduate. 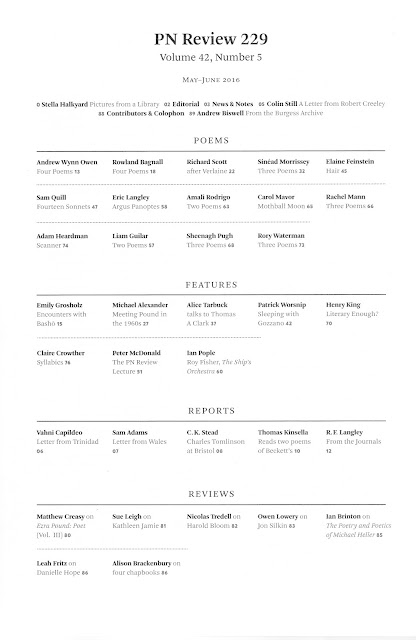 But....One of the main reasons I studied Medieval Literature and History in the first place was that sometime in the 1970s I found a copy of Michael Alexander's translations of Old English Poetry in that classic Penguin Classics collection. I'd already read his translation of Beowulf and was hooked.

And now, all these years later,  the only attempt at 'translation' of an OE poem I'd put my name to in public is published in PN Review alongside an article by the same Michael Alexander, which he begins by discussing how he came to write those translations.

One is awed.  Sometimes things do go right.  Start up the happy dance.....

Not every poetry book has its own 'teaser trailer' but mine does.

https://youtu.be/OJRjoBxdjbc
Posted by Liam Guilar at 8:56 AM No comments: 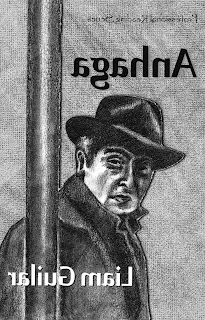 You can now buy copies of Anhaga from the author's website www.liamguilar.com/shop and we'll ship them anywhere in the world.
Posted by Liam Guilar at 11:55 AM No comments: