The Last issue of The SHOp 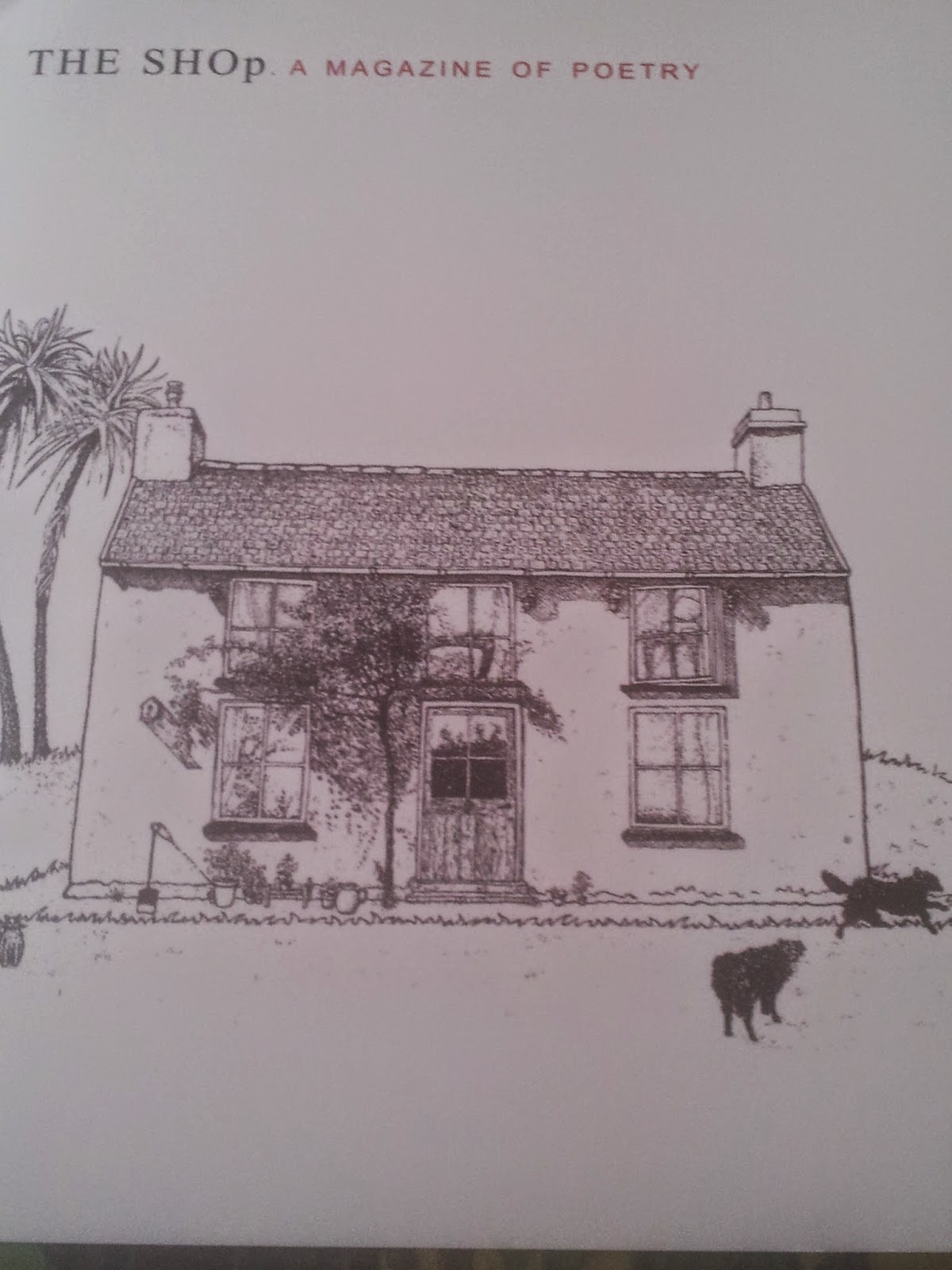 The last issue. It's an honour to be in it. The editors, John and Hilary Wakeman, have been accepting pieces of mine for a while, when no one else seemed interested. This either means they had bad taste or were exceptionally perceptive. I prefer to believe the latter.

Poets often grumble about editors. But without editors there is no publication. So my thanks to John and Hilary and my best wishes for their retirement. It really was a marvellous publication.

Thankfully that “rancorous old sod”, his words, not mine, is at it again performing measured acts of literary criticism in a public arena. For which we should all give thanks.

There have been discussions on this blog about the poetry of the Great War. I am deeply suspicious of the reasons for its popularity in schools and constantly bemused by some of the uses to which it is put. So it’s interesting to hear Hill’s take on the subject. His lecture should be compulsory listening for every English teacher about to launch into that unit on “Great War Poetry”.

These notes from the lecture of 2nd December.
http://media.podcasts.ox.ac.uk/engfac/general/2014-12-05_hill_lecture_edited.mp3

(I apologize for any typing errors. I have not attempted a full summary, merely picked out some of the bits that interest me. Towards the end of the Lecture, Hill discusses Isaac Rosenberg, comparing his poetry and ways of thinking through and in poetry to Owen’s. I have not included this as it would seem at a tangent without its complete context. There is an argument running through the lecture about the social and political consequences of the cult of Wilfrid Owen and fraternal pity which I will not ruin by summary.
Unless otherwise noted what follows is as near as I can get to quotations. )

On the use of this poetry in schools and Universities:

At the root of school and university indoctrination in the rhetoric of Great War poetry there resides a dangerous sentimental fallacy: A belief that the work of Sassoon and Owen…That their work represents the central common and indisputable truth of the Great War of 1914-1918 in which treatment, significant items of testamentary personal witness are taken as if they were total objective evidence and finality of historical fact.  In reality such a conclusion is not rationally possible.
…..
On Wilfred Owen and Pity

There is a fair amount of sardonic anger in the poems and letters of Wilfrid Owen….he is as a maker of beautiful enduring entities out of words who was highly intelligent…

But that preface, that preface. That preface has a hell of a lot to answer for. I wish that it had not been written, or that having been written it had been lost.
Above all I am not concerned with poetry. My subject is war and the pity of war. The poetry is in the pity. (Owen)

Where art is concerned one should never trust the sincere. These three short sentences amount to an intellectual and emotional self-betrayal, on Owens’s part, and a betrayal of all that should be strong and enduring in English poetry, British poetry, in whatever century, certainly in the 20th and certainly in the first years of the 21st.

If you seriously profess poetry, as Owen most certainly did, the poetry can never be in the pity, the pity can only be truly registered in the poetry. Those twenty- three fatal words have achieved the unhappy role of appearing to issue a peremptory countermand against everything that is intelligent in English poetry and in critical discussion of poetry written in English for the past half century. That is to say since the first performance of the War Requiem [in Coventry Cathedral in 1962] released to the public the useful notion of vicarious mourning as the most innocuous response to wide spread public malpractice.

(His reading of two of Owen’s poems (‘Anthem for Doomed Youth’ and ‘The Parable of the Old Man and the Young’ then makes his point about Owen as poet, and makes clear what he is objecting to. He prefaces these readings):

You must not imagine that in criticizing these poets that I am in some way feeling superior to them. I say it is the normal condition of writing at any kind of demanding pitch that you are not going to be able to do it a hundred percent of the time and the recognition of this is not in any way a diminution of one’s profound admiration of their achievement.

(And finally as a throw away line, almost…)

One of the greatest perplexities we face, as readers and critics of poetry, of whatever period, is that what we bring to the discussion is inevitably a mingle mangle of technical detail…where it is possible though to a limited extent to be precise…to be precise….. but we embroil it all with smatterings of sociology,  history and personal experience. Personal experience, the application of this latter contribution is usually ?evil? and is therefore to be regretted that personal taste is all that most people are prepared to bring into the arena of literary critical debate; “Well I like it, I think it’s good, it reminds me of…”

Posted by Liam Guilar at 9:51 AM No comments:

'Modernism from the Margins' Louis MacNeice and Modernism.

Louis MacNeice seems to be suffering, or enduring or benefitting from a re appraisal. But some of the re appraising seems dubious.

"Modernism from the Margins: the 1930s poetry of Louis MacNeice and Dylan Thomas" by Chris Wigginton. According to the blurb on Goodreads;

"This book is an important contribution to contemporary discussions of both of these writers, and of the general issues of modernism, postmodernism, literary identity, and cultural identity it raises".

But while I'm sure someone somewhere is excited by all those things, I wonder what happened to scholarship.

Reacting to other critics, especially Edna Longley and Peter MacDonald who according to Wigginton argue for MacNeice's "rejection of Modernism",  Wigginton extracts some quotes from MacNeice's critical writings to argue the opposite. The key is the verb 'extracts'.


He [MacNeice] observes Eliotically that:

'Pound takes the whole of history as stock for his soup and cuts backwards and forwards from one country or one century to another, adding plenty of the smell of cooking and the voice of the type writer to make it clear that all these elements combine for him in a living and contemporary whole.'

MacNeice's ventriloquizing of Eliot in order to endorse Pound is revealing of his complex, ambivalent critical attitude to Modernist aestheticism, and the critical work should not therefore be taken simply to endorse a recession of Modernist practise in his poetry of the 1930s. (p13)

Taken out of context, simply as words on the page, in what way does the quote endorse Pound? or his method? For someone as careful as MacNeice, that "for him' surely qualifies the statement.

But what's bothering me here is that there is some very selective cutting at work.

The paragraph Wigginton quotes is from a chapter in 'Modern Poetry' called 'Obscurity' and begins:

'The extreme example of this method is Ezra Pound's Cantos'.

[The 'Method" is the bringing together of apparently unrelated elements to make a whole: Eliot's 'cooking and Spinoza' which MacNeice has just quoted.]

The passage Wigginton quotes continues immediately: 'I doubt if they will so combine for many of his [Pound's] readers. In a poem on so large a scale the method palls and Pound's bits of history and culture are so diverse and so particular as to fail to arouse many echoes' "Modern Poetry (p.163-164).

I don't see this an endorsement. It sounds like failure. The discussion of Pound in this section ends:

'For the Eliot-Pound method allows of the bodily transference into a poem not only of tags from other poetry or prose but of bits of public records, washing-bills, statistics. Sometimes as in The Waste Land, such ingredients blend successfully, fused together by an intense lyrical theme, but on the whole I consider this method to be vicious. The poem tends to remain heterogeneous and therefore bad'.(p164-165)

So th method is "vicious" and leads to "bad" poems.

Cherry picking quotes is something everyone does: MacNeice was always happily ambivalent about most things, and I think Wigginton might be right to argue that he didn't "reject modernism", but selecting the bit that proves your preferred version of the world when it's embedded in text which flatly contradicts your preferred version doesn't seem like good critical practice.

In the rush to be political and theoretical, something got lost. And yet Wigginton is right, I think, to say that MacNeice's attitude toward an undefined Modernism was ambivalent. In his critical writings, on Yeats and in "Modern Poetry" MacNeice allowed his ambivalence to stay open, so that statements are always being questioned and reviewed from a different perspective. This openness to contradictions and willingness to explore more than one side of the argument  is a lesson most critics don't seem to have learnt.

Posted by Liam Guilar at 7:28 PM No comments: