In stepping stones, Heaney is asked why he was attracted to translating Beowulf: admiration for the poem or a love of Anglo-Saxon as a language?
“More the latter. I didn’t in truth have any special fondness for Beowulf before I started work on it.….The more elgaic poems “The Wanderer” “The Searfarer” were the ones that gave me a feel for the language , voices shaken by the North Sea wind, as it were, voices crying under the ness. I’m still not sure whether Anglo-Saxon was a heard melody for me or an unheard one, a music I imagined for myself.” (p436)

I’ve been wondering about this ever since I read it before Christmas. My feelings about Beowulf are damn near schizoid. But as sound system; as a spoken music Old English sings or it does in my head. I’ve never known if it’s an imagined music either. I’m sure some expert somewhere would haul me over the coals for the way I speak it.

But there are phrases that just sound good. Unweder sounds right in a way “bad weather” can’t and Byrthferth’s description of winter ”and he byð ceald and wæt” evokes a whole world of grey rain and people huddling by a smokey fire in a way "and it is cold and wet' doesn't. I think it's something to do with the vowel sounds.

But there are also individual poems that are part of the anthology that defines “poetry” in my head.
Wulf and Eadwacer is one of them. It’s often presented as an intellectual curiosity: it is. It’s notoriously difficult to translate. As is often pointed out the first two lines:

Is to my people as if one might give them (a battle/sacrifice/gift/message/game)
Will they (receive/consume/oppress/relieve) him if he comes (with a host/in violence/in need).

The assumption is that if we only knew the back story; who the speaker is, who Wulf and Eadwacer are, it would make so much more sense and we'd know which choices to make in the brackets above. Most translations work on the circular argument of deciding what the back story is first, then translating to fit it.
But it's fun to play with the idea that the creator of this poem was not some hairy rugby player quaffing too much mead in between beating the billy be damned out of his neighbours, but a skilled artist who knew exactly Hwaet! he was doing.

Ambiguity is everywhere in Old English. In the first line of “The Wanderer”

the verb means to hope for but also to experience. The translator is forced to choose: does the speaker expect mercy or experience it? The original audience was under no such obligation: they could hold both options open. Yearning for it he experiences it?

So imagine the creator of Wulf and E enjoying the polysemic nature of the language and deciding to push it to the limit.
In one sense the speaker is saying in those first two lines, “who knows what they’ll do if he turn up, lots of things most of them bad”. Which sounds awful put like that but as

are a model of compressed meaning.

It's true the lines sing. All poetry is spoken music but Old English more so than others. Wolf, my wolf just doesn’t have the melody of: Wulf, mīn Wulf

spits its message, the first half running smoothly, the second tripping over itself as if she is retching at the memory..

So the music is important.

But it’s the sense of a voice speaking, the irony of the words, the meaning pulsing along the lines. The odd combination of the very physically real: she sits by the hearth in rainy weather, it is not the lack of food but his infrequent coming that makes her ill and the mythic vagueness of the situation. Like folk tales before Walt and Co got to them. 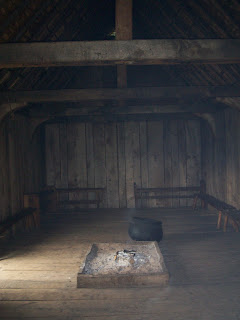 Graves, God bless’im, argued that the rhythm of Anglo-Saxon poetry grew out of the creak of the oarlocks. You couldn’t prove that if your life depended on it, but it’s a great image and the sense of the poem, pulsing and pausing along the fetch of the line like a rowed boat, works for me.
That terse epigrammatic ending:
Þæt mon ēaþe tōslīteð þætte nǣfre gesomnad wæs,
uncer giedd geador.
raising the specific into the general without becoming vague or wishy washy.

Not just a heard music then, but a love of the made thing.
Posted by Liam Guilar at 8:38 PM

That's interesting about the backstory element. I confess to knowing bugger all about OE, but I like the way it sounds and how closely it can remind you of our modern tongue. I've read Beowulf, by SH and liked it well enough, but I don't know enough about it to comment more lucidly :P