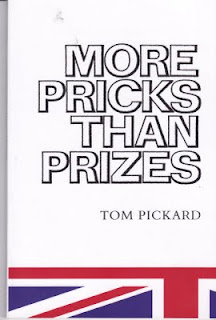 I feel bad that I bought a second hand copy, but the press‘s website wouldn’t take my money for a new one and, frustrated, I went to bookfinder.com and they threw this at me.

Having apologized, it’s unusual to find a book, especially such a short one, which explicitly contains the criteria that should be used to evaluate it.

Both are quotes from Basil Bunting who has a staring support role in the story of Pickard’s arrest and trial. The first is from an essay Bunting wrote which criticised Malcolm Muggeridge: “It is agreeable to fancy that some day it may not pay a man who has material for an essay to swell it to the length of a half guinea book by verbose repetition and argument round and round…”

So perhaps the best thing I can say about “More Pricks than prizes” is that there is probably enough material here for a thick autobiography of Pickard and a biography of BB, and it has been compressed into 68 pages.

In a letter sent to Pickard while he was awaiting trial, Bunting wrote: “Keep objective; your own unhappiness is not capital stock but what your eyes see and your ears hear is...” The unhappiness is certainly recorded but there’s no wallowing in it. Pickard has “kept objective”.

In “Moab Is my Washpot”, Stephen Fry records a similar series of events. But in Fry’s version, being arrested for fraud and going on remand is all a merry jape, and while he calls attention to what a scallywag he was, there’s a sense of unreality about it all. I can’t be the only person who keeps thinking the title is really “Moaning, I’m a tosspot” (to the tune of tell them you're a womble). (And no, I don't know why I bought it or read it)

Pickard tells his story and still manages to step aside. Bunting’s admonition put into prose; emotions first-but nothing in the poem except facts or things. Which given this is autobiographical is no mean feat.

But it’s not a case of dumping the facts on the page and leaving them to the reader. (‘Nennius’ did this in the ninth century and it wasn’t even a good idea then). The facts and things have to be selected and manipulated. There’s a sequence which describes Pickard and his friends’ attempts to find enough second hand books to refill crates that had held “a ton” of Ugandan cannabis. It could have been a scene from “softly softly”: dodgy dialect lads, with flat caps, in a dark London alleyway filling a battered transit: it could be an episode from Black books: with Bernard perversely trying to stop them from buying his useless stock. Instead it sparks an alliterative riff, which threatens to run through the whole alphabet, about books and their writers. It manages to be funny; it manages to show off; it conveys the enormous amount of books they had to buy, and it puts the boot into types of books and types of writers and the publishing industry. It evokes “Sittin' in a sleazy snack-bar/ Snuckin' sickly sausage rolls”. But it never loses sight of the reality of what’s going on.

I think his description of crossing the iron curtain in a train is going to stick in my head for a long time.