Moving from Geoffrey Hill or Christopher ricks as Critics to someone like Patrick Kavanagh there is a distinct shifting of gears. Downwards. What follows are scattered notes on Kavanagh's stated attitudes about Yeats.   References are to three books edited by Antoinette Quinn: CP  Collected Poems 2004, PK Patrick Kavanagh a Biography 2nd ed 2003 and APC A Poet's Country: Selected Prose 2003

Yeats
Yeats, it was very easy for you to be frank,
With your sixty years and loves (like Robert Graves).
It was thin and, in fact, you have never put the tank
On a race. Ah! Cautious man who no sin depraves.
And it won’t add up, at least in my mind
To what it takes in the living poetry stakes.
I don’t care what Chicago thinks; I am blind
To college lecturers and the breed of fakes;
I mean to say I’m not blind really,
I have my eyes wide open, as you may imagine,
And I am aware of our own boys, like Ben Kiely
Buying and selling literature on the margin.
Yes Yeats, it was damned easy for you, protected
By the middle classes and the Big Houses
To talk about the sixty year old public protected
Man sheltered by the dim Victorian public muses.

Kavanagh was invited to talk at a symposium in Chicago in April 1965 to celebrate the Centenary of Yeats' birth (Quinn PK 428 ff). Quinn wrote that Kavanagh "Had serious reservations about appearing to do obeisance to Yeats".  He decided to take the free trip but treat the event with contempt.

By coming this long distance to speak about or around w.b.yeats it presumes that we think him a great poet and a great man. But I have always had reservations about Yeats. The fact he wasn’t Irish and never wrote a line that an ordinary Irish person would read is not against him. No true poet ever wrote for the ordinary man or woman…. (Qtd Quinn PK 430)

When asked in the ensuing debate what motivated his attack on Yeats Kavanagh replied:”Spite”. As insults were traded Stpehen Spender, the moderator intervened to say there was no point in continuing a discussion which amounted to little more than a trading of insults. (Quinn PK 430)

In his published writing Kavanagh was more ambivalent. Though the ambivalence may be a fault of style rather than attitude.

The foundation of the Abbey Theatre, his reactions to 1916 and the constant delight of his poetry are rich compensations for having to suffer the crowds of silly women and charlatans in Yeats litany of saints. What a marvellous technician he was. He could produce magic in verse almost automatically. He was a brilliant poet yet somehow I feel that a truly great poet would not have been all his life the mere mirror of the phases of his time but would have spoken the unchanging beauty.

In an article called George Moore’s Yeats published in the Irish Times, Yeats centenary supplement, June 1965 after he had returned from Chicago, Kavanagh’s attitude is harder to pin down. He tends to ramble. He sounds like he’s talking to himself and can’t be bothered to go back and sort out exactly what is his opinion. Great critical literary intelligence he is not.

He reads as though he hasn’t got the material under control: has too much to say and in consequence never quite says anything clearly. And there’s a vein of sly spite which recalls the vindictiveness underlying ‘On Raglan Road’.

He begins with a fairly emphatic statement (182): I fear we are getting too serious about Yeats. There is no doubt now that he was a great poet and probably the last great poet the earth will produce.

He then qualifies Great…It implies bad heroic art-like Rodin’s or even Michelanglo’s…I don’t think Yeats was great in that way, and that he had enough of small simplicity in him to be truly great.
And yet I wonder had he?
If I seem to be a bit wobbly about Yeats’ simple greatness,  it is not so much the detachment of his verse as his ability to integrate himself with Bourgeois society.  (184)

In presenting the grounds of his judgement Kavanagh reveals the weakness of his criteria and the limitation of his criticism.

There is another defect in Yeats-his dislike of ideas. He maintained that ideas were for the pulpit, It may be that he knew his limitations. Reading De Quincey’s reminisces of the Lakers….Coleridge and Wordsworth and Southey-I couldn’t think of him as a man in the intellectual class of these.
Nor has the written a poem as memorable as the least of these-Southey’s Blenheim. (184)

Kavanagh doesn’t quote the poem, but it begins…

IT was a summer evening,
Old Kaspar's work was done,
And he before his cottage door
Was sitting in the sun,
And by him sported on the green
His little grandchild Wilhelmine.

She saw her brother Peterkin
Roll something large and round
Which he beside the rivulet
In playing there had found;
He came to ask what he had found,
That was so large, and smooth, and round.

To argue that Yeats wasn’t on the same intellectual level as Coleridge is to say little: very few people were or have been on STC’s level. To lump Wordsworth and Coleridge and Southey together as equally intellectual is ludicrous. To pretend Yeats never wrote anything as good as the verses quoted above is either evidence of stupidity or willful perversity.

But then no poet writes for posterity except accidentally, And the worst one can say of Yeats is that he was a real man of letters. Real men of letters hardly ever produce immortal poetry, You could hardly call Shakespeare a man of letters, Pope was, in a an oblique sort of way, Not Swift.

Here the ground of the judgement has disappeared. In what way did Swift and Pope differ in their approach to writing, and how could their conditions compare with Shakespeare’s. What exactly is a ‘Man of Letters’ if  PK, who made his living from journalism of one sort or another, wasn't a “Man of Letters”?
These are pub verdicts which might sound good over the Guinness but don’t stand scrutiny in print.

He finished by admitting his equivocation but he is certain of W.B.Y’s bad influence on Irish writers. “A common passport is not a common ground”
I know I have written equivocally of Yeats and yet I know that he was a nearly great poet.
He had compromised the ultimate integrity.”185
And what is the ultimate integrity we ask ourselves. And the statue refuses to respond: 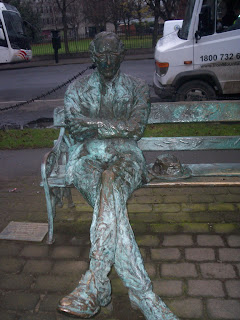