The Defences of Poetry: Part three, an interlude

Between Sidney and Shelly much changes. Poetry in English develops a history and a roll call of famous names and achievements.

After the Restoration, written poems move out of the court and into the market place. However, while Rochester may be the last courtier poet worth reading, writing poems remains the activity of those who do no not need to make a living from it.

More importantly, the idea which today we take for granted, that an individual subject can not only originate ideas but own the written expression of those ideas, becomes gradually established, a movement marked by the first Copy Right laws of 1709. It’s one of the great fault lines running though the history of English poetry. The anonymous Scop, Chaucer, whoever wrote Sir Gawain and the Green Knight,  Spenser, Shakespeare, Milton and Pope are split from us not so much by their language and subject matter but by the idea of the poet as individual genius who has something to say that has never been said before. “Originality” rears it ugly head and the shrinkage towards the lyric is well under way.

During and after the “Romantic Period” , “Poet” became a title, a label of a perverse distinction, a role to inhabit, rather than the name of a practitioner of a craft. Given that poetry never had the majority share of the print market, and that with one or two startling exceptions, no one made a living from the sales of their poems,  “Poet” offered a choice between the lofty mountain top or the desperate garret.
Iconographically, Wanderer above the Sea of Fog painted in 1818 by Caspar David Friedrich. presents one version of this role. 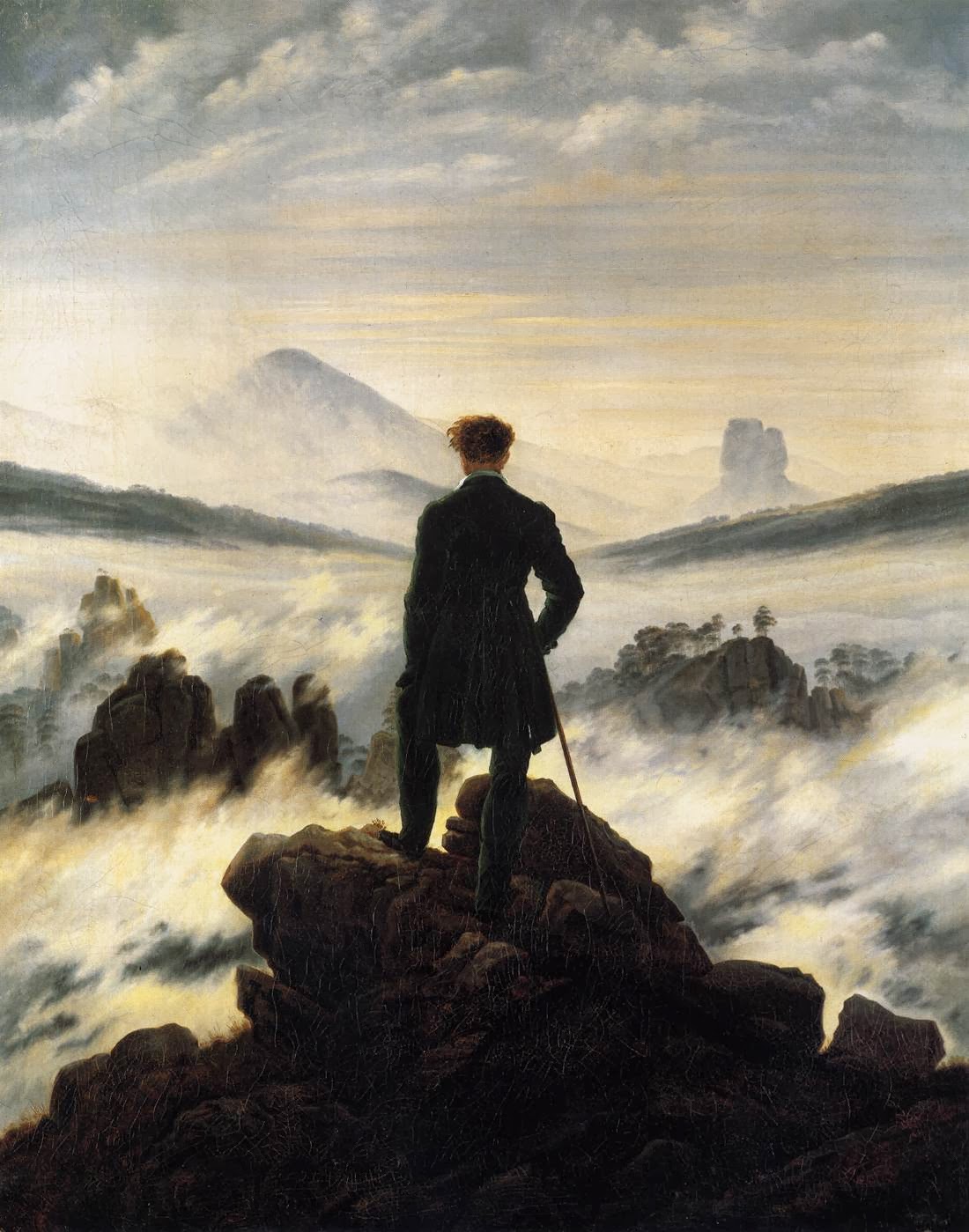 The figure, alone above the clouds, isolated, looking down on the World beneath was the visual representation of one version of the Romantic Poet just as Wordsworth standing on Westminster Bridge is a similar written one. The clearest literary expression of this is in Ralph Waldo Emerson’s essay ‘The Poet’, printed in 1844 but given as a lecturer earlier than that.  The implications of Sidney’s idea that not all poets write poetry, and not all verse writing qualifies for the title of poet, is played in one paragraph which is worth quoting in full:

The sign and credentials of the poet are that he announces that which no man foretold. He is the true and only doctor; he knows and tells; he is the only teller of news, for he was present and privy to the appearance which he describes. He is a beholder of ideas and an utterer of the necessary and the causal. For we do not speak now of men of poetical talents, or of industry and skill in metre, but of the true poet.  I took part in a conversation the other day concerning a recent writer of lyrics, a man of subtle mind whose head appeared to be a music box of delicate tunes and rhythms, and whose skill and command of language we could not sufficiently praise. But when the question arose whether he was not only a lyricist but a poet, we were obliged to confess that he is plainly a contemporary, not an eternal man.  He does not stand out of our low limitations, like a Chimborazo under the line, running up from a torrid base through all the climates of the globe with belts of the herbage of every latitude on its high and mottled sides; but this genius is the landscape garden of a modern house, adorned with fountains and statues, with well-bred men and women standing and sitting in the walks and terraces. We hear through all the varied music, the ground tone of conventional life. Our poets are men of talent who sing, and not the children of music (p.81).

As a job description, it is difficult to imagine there would be many applicants. What exactly does the first or last sentence mean in terms of a poem? However, the would be poet need not worry. “Poetry” is a verdict, and the verdict is out of the writer’s hands and in the Critic’s.

However, the Romantic ideal of the poet as solitary far seeing genius had its dark side. The iconographic representation of this is Henry Wallis’ painting of The Death of Chatterton.  Chatterton may be the first poet who was more famous for being famous than for his verse. Hazlitt certainly thought so. The modern biographer Richard Holmes speculated that he did not intentionally commit suicide but simply tried to medicate himself and got the dosage wrong. 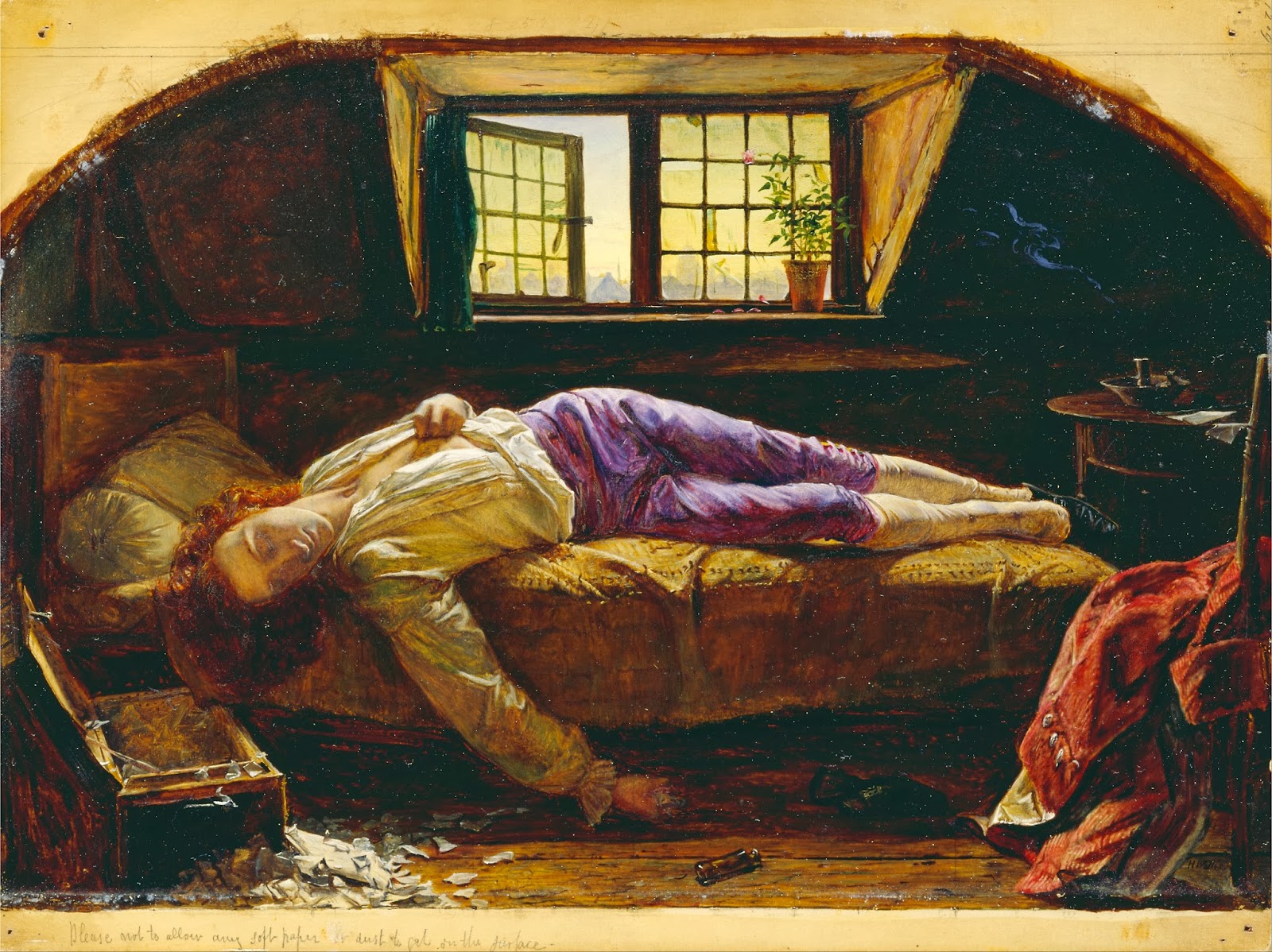 Young, alone, poor, isolated by his genius which the outside world did not appreciate, the outsider-poet is destroyed by the indifference of the cruel world and takes his own life, his poems shredded in a last act of despair. It sounds Romantic in a way “Fraud dies due to faulty maths” doesn’t.

As a pose it is tedious, or the prerogative these days of popular musicians strutting in a music industry driven by the need for marketable “attitude”, but when it was taken seriously, and surprisingly it was, it validated a set of assumptions about the genius writer and his (sic) relationship with his art and his audience. Which brings us to Shelley. Though Peacock, who is much more interesting,  first.

Labels: attitudes to poetry, The Defence of Poetry