Anhaga is now available in Australia 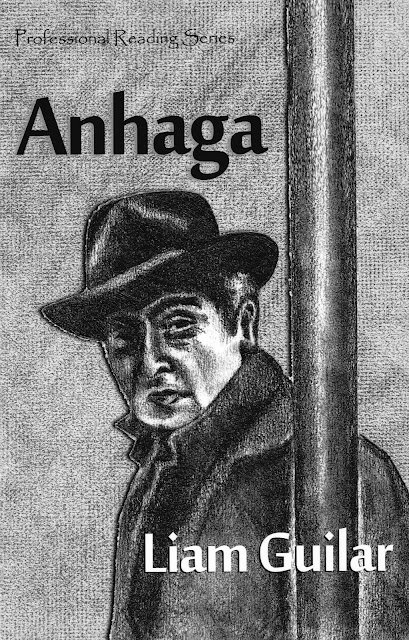 "Liam Guilar’s epic book Anhaga consits of two halves directly related to each other. In the first we see a  murder - a sex crime - enacted on several levels moving between children’s stories, through hard-boiled detective fiction, tough realism and slasher movies. The central voice,  beset with loneliness - exile as the poem has it -- and frustration shape-shifts between its various literary and mythical contexts, but is always at the edge of explosive violence. In the second we sail far closer to myth with the figures of Heledd and Nemain. Basil Bunting’s Briggflats haunts the book. The blend of sensational fiction and high literary ambition make Anhaga an extraordinary poetic experience." -- George Szirtes


Anhaga is old English for a solitary man.
A nameless man wakes up in an unfamiliar room. He doesn't remember anything about his life and he can't distinguish his dreams from his memories. An elderly stranger lives in a dated world inside his  mirror and occasionally steps out through the glass to give him advice. There's a woman who he's sure he's met before. She might be a vampire. Or just a serial killer. There's a disturbing case of past life regression at the hypnotherapists.

The number one suspect in an ongoing murder enquiry the Police begin to suspect his loss of memory is an elaborate alibi.

Australian readers can get ahead of the rest of the world and order their copies direct from the author's website: The Shop


Some more of the pre-publication praise for Anhaga

A dark and disturbing Gothic epic. Guilar sends precise notes from a dystopian shadow world where nothing is as it seems. His meditation on murder and slaughter draws on The Wanderer and Canu Heledd, Wyatt, Wordsworth, seventeenth century tragedy, the great modernists, Eliot, Pound, Basil Bunting and Yeats through to Warner Bros cartoons and Victorian songs to create a dreamscape at one familiar and uncanny.” --Richard Burton, A Strong Song Tows Us, The Life of Basil Bunting, Prospecta Press, 2013

"Anhaga is both erudite and up-to-the-minute, in a wild mix of styles that recalls at times the verbal trickery of Joyce and at times the pangs of the Old English lyric, and with a plot that keeps us reading and guessing." -- Maryann Corbett, Mid-Evil, University of Evansville Press, 2015

"In an atmosphere of alienation, bereavement and inching menace, the lone protagonist(s) of Liam Guilar's fifth book struggle with questions of identity, urges borne of lust/desperation and the futility of self-actualization. The ordinary is pitted against the iconic and majestical in this strange and unsettling book." -- Alexandra Oliver, Meeting the Tormentors in Safeway Paperback, Biblioasis 2013

If you live in Australia you can order your copy here