What was the name of Hengist's daughter 3/4

If you thought the answer was Rowena, read on…. 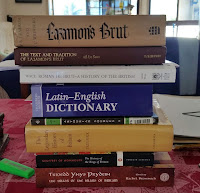 When Geoffrey of Monmouth picks up the story three hundred years after Nennius, the ‘Good Vortigern’ version has probably disappeared and telling an anecdote that did little more than vilify the ancestor of a forgotten dynasty would have been pointless. (For Nennius's version see previous post.)

In the narrative arc that Geoffrey had skilfully created, the girl had to do more than serve the booze and be bedded by the King if he were to avoid the story teller’s nightmare when the audience asks, yes, but why did you tell us that?

Geoffrey drops the incest story (if he ever knew it) and the incidents with St. Germannus, and then gives the girl a name and an active role to play. To the question, ‘Why did you tell us this?’ he manages to suggest that she is instrumental in the fall of Britain. She is no longer simply an example of Vortigern’s lack of sexual control. She exploits her influence and position to support her father and her people.

Tatlock listed six versions of her name in six of the surviving mss: Renwein, Renwen, Roawen, Ronwen, Rowen, Rouwein, Ronven. It’s easy to overlook the fact that however you spell it, the name is not Germanic.

Ron Wen makes sense in Welsh as ‘Slender/white spear’ but as Tatlock pointed out, it makes no sense in a Germanic language. It’s been suggested that Rowen is a British attempt at an English name Hrothwyn, but that seems strange since both Hengist and Horsa remain resolutely English and Ronwen, not Rowan is the older form. Tatlock couldn't find it anywhere as a proper name. Rachel Bromwich pointed out that the name occurs nowhere else. It is not found in any other Welsh source except as the name of Hengist’s daughter.

(For sanity’s sake, I’m going to refer to her as Rowena except in direct quotes.)

In this new version, Rowena arrives in Britain with Saxon reinforcements. We are told her beauty is ‘second to none’.  She serves the drink, but Geoffrey introduces the Wassail episode, fleshing out Nennius’ feast. Approaching the king with a golden cup full of wine she says, ‘Laford King Wacht heil’ (Even in Geoffrey’s Latin the quote is in Middle English).  Vortigern turns to his interpreter who explains the custom. She says, ‘Wasshail’, he replies ‘Drink hail’, takes the goblet, kisses her, and then drinks. Repeat as required.

It may be a ‘folk motif’; it may have mythological significance (in later Welsh tradition ‘R. the Pagan Woman’ is seen as the progenitor of the English); it may be an origin story for a drinking custom current in Geoffrey’s time; it may be all of the above, but it’s guaranteed to bring the girl to the King’s immediate physical attention. It succeeds.

They are married in haste, and Hengist, in consultation with his brother and advisers asks for Kent in return.
So far, Nennius with additional details.

The wedding infuriates Vortigern’s leaders and sons. But as soon as she has been ‘handed over’ Hengist is now in a position where he can speak ‘as your father in law’. More Saxons are invited to Britain, and settled in the north. The Britons, alarmed by the influx of pagan warriors, protest to Vortigern but ‘Vortigern was completely opposed to accepting his people’s advice, for, because of his wife, he loved the Saxons above all the other folk’.

Vortigern’s son, Vortimer, is appointed king and is not only successful in battle against the Saxons but begins restoring churches. Oddly the latter detail is the catalyst for Rowena’s first semi-independent action. 'Semi' because in Geoffrey’s story the devil and evil spirits are active:
‘A certain evil spirit which had found its way into the heart of his step-mother Renwein immediately became envious of this virtuous behaviour of his and inspired her to plot Vortimer’s death’.

She researches poisons and then has him killed, having corrupted one of his servants with innumerable bribes. This is not in Nennius but does provide a reason for Vortimer’s sudden death.

After Vortimer’s death, the Britons restore Vortigern to the throne. ‘At the request of his wife’ he sends messengers to Hengist in Germany, to ask him to return to Britain. Vortigern asks him to come secretly with a few men. Hengist returns with three hundred thousand warriors. Learning this, Vortigern and the princes of the realm decide to oppose him. ‘The daughter of Hengist sent messengers to tell her father of this decision and he in his turn considered what he could do best to counteract it’.

This is her last action in the story, nor is she mentioned again. Geoffrey drops Hengist’s statement that the Saxons will protect Vortigern during the massacre ‘for the sake of my daughter’. Geoffrey makes no reference to anyone else dying with Vortigern in his tower.

In this version then, Rowena plays a more direct role in the fall of Britain.  She is responsible for Hengist’s growing influence over Vortigern, for the death of Britain’s heroic defender, and for the information that pushes Hengist towards the treacherous slaughter of the Britons.

What Geoffrey finds most shocking is not Vortigern’s uncontrolled sexual desire, or the fact he’s ready to trade Kent for the girl, but the fact that she is a heathen. Having repeated Nennius’ claim that the devil enters Vortigern’s mind, Geoffrey interrupts the narrative ‘I say that Satan entered his heart because, despite the fact that he was a Christian, he was determined to make love with this pagan woman’.

In Geoffrey’s version, the enormity of this is emphasised by a triple movement in the narrative. When Hengist first appears, Vortigern comments negatively on his faith. When Hengist later asks for land, Vortigern refuses the request because Hengist is a pagan. The extent to which Vortigern is overwhelmed by his desire for the girl is thus emphasised when he makes no objection to her faith. The implication being that if he had insisted on her conversion before the marriage, it would have been acceptable.

Rowena, clothed with a variety of names, and now playing an active role in the fall of Britain, will have her story fleshed out and finalised by Wace and Laȝamon. The structure of Geoffrey’s narratives suggested a pattern. Laȝamon makes the pattern explicit and raises Rowena from a nameless server of drink to a conniving murderer. Which will be the third and final post. 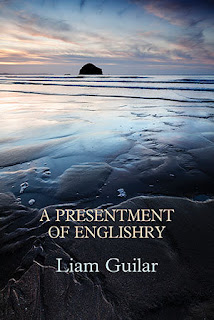 I always feel as if 'm getting an education when I read your blog, Liam. (And, I mean that as a compliment!) As someone with a profound ignorance of early English literature, I still can't help sighing in frustration at yet another embedded tale of 'wicked pagan woman leading a hero astray with sex.' It's a song still being played in countless courtrooms around the world where a man's defense is that, 'she made me do it.' Honestly, this social/Christian construct of wicked temptress needs to be shredded. End of rant. I know your focus is on the story and not on current social commentary, but every time I read this same plot line in different cultures and historical periods I find myself wondering about how deeply ingrained this particular male perspective actually is.

I see your point, but by the time the story gets to Layamon any fault lies with Vortigern, not Rowena. And although the fact she is a pagan is unavoidable, she is not wicked until she poisons Vortimer....?