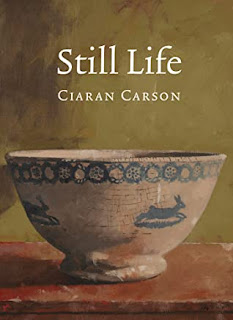 My review of Carson's 'Still Life', his last book of poems, is up at the Brazen Head:

There’s a picture of Ciaran Carson on the back cover. He’s sitting on a bench seat. Tall buildings, trees and streetlights provide a diminishing perspective taking the eye towards an approaching bus. The bus is slightly out of focus. There’s something, perhaps someone on a bike, in front of it.

The word dapper presents itself to describe the poet. Hat, blazer, tie. The refinement of a white handkerchief in the breast pocket. The facial expression is harder to read. Perhaps a hint of a mischievous smile? Perhaps Puckish is an appropriate description?

In a book of poems about pictures, this one seems carefully arranged. Perhaps you know the story. You walk into the woods and meet a well-dressed man on a path you didn’t mean to take. He’s usually sitting on a log, or a style. If you share something with him, you’ll be rewarded with a story, though the story might take up several lifetimes and when you return to where you started, you’ll find the world has changed.

There’s an inviting space beside him on the bench. I would offer him the OED’s etymology of dapper, which I think he would enjoy. It suggests dapper was adopted at the end of the ME period ‘with modification of sense, perh ironical or humorous’ since in Middle Dutch it meant ‘powerful, strong, stout, energetic’, which might be superfluous to requirement, as the saying goes.  Mod Dutch gives ‘valiant, brave and bold’ and they don’t seem appropriate either.

I want to thank him for ‘Last Night’s Fun; in and out of time with Irish music’, one of my favourite books, for ‘For all we know’, one of the most interesting of poetic narratives, and for the pleasure of all the other poems, translations and the weird and wonderful prose.

The first poem in the book concludes:

It’s beautiful weather, the 30th of March, and tomorrow the clock’s go forward.

How strange it is to be lying here listening to whatever it is is going on.

The days are getting longer now, however many of them I have left

And the pencil I am writing this with, old as it is, will easily outlast their end. (p. 13)

Carson died in October 2019. Still Life was published posthumously that November. It’s inevitable that those two facts colour any response to the book. They don’t need to. The book doesn’t need your sympathy.

On a first reading the poems seem colloquial, easy to read, informative, with moments of arresting imagery:

‘My dreams are filled with wavering buildings, avalanches of astonished/glass.’ (p. 19)

In characteristically long lines, with their deceptive appearance of artlessness, each poem is a reflection on a picture, which provides the poem’s title. ‘Reflection’ is inadequate because the colour and detail in each painting is a focal point, not always the beginning or end: ‘Because when looking at a thing we often drift into a memory of something else/however tenuous the link’ (p. 15).

But ‘reflection’ is also apt because the pictures become distorted mirrors which reflect the observer’s life and pre-occupations. Each viewing is a reviewing, no matter how familiar the he thought the picture was. The silent present ‘you’, often Carson’s wife, Dierdre, notices things he hasn’t. Things unnoticed re-present themselves, and perception and memory shuffle the elements into new versions of the picture.

A Carson poem is typically not a hermetic object which I think is one of the reasons he was a fascinating writer. An intelligence was moving through time and space and recording the process.

And I loved the big windows and whatever I could see through them, be it cloudy or clear

And the way they trembled and thrilled to the sound of the world beyond. (p. 84)

The key phrases here are ‘whatever I could see’ and ‘the world beyond’.

There is no ‘high and low culture’, no misplaced sense that some things aren’t ‘appropriate’ subjects for poetry. The verbal registers move from colloquial to technical.  Wittgenstein may be quoted, but he’s just as much at home as the small pot of daffodils broken by an idiot vandal, or the memory of ‘blue birds anticlockwise spiralling around the interior of the toilet bowl’ (p. 84).

Every tune recalls other circumstances in which it has been played; and the conversations and anecdotes sparked off by the tunes are essential to a good session. It’s a mix of tunes, songs, stories, drinking, eating- whatever happens to be going on, including smoking in the days when you could smoke in bars. (Elmer Kennedy-Andrews (ed) Ciaran Carson, Critical Essays, Four courts Press, 2009 p.15))

Think of each poem not as a single tune but a recording of the whole session. It’s an astonishing achievement, and he sounds like no one else.

When the vandal struck. Thud. What the…? The gate clanged. I looked out

What a book though. I have it before me, open at this colour plate, jotting notes

Into a jotter, which I’ll work up later into what you’re reading now. (p. 11)

The poet doesn’t live in self-imposed exile on Parnassus, occasionally sending his effusions to the plebs below.  Street names map a real Belfast and anchor him into the daylight world. You can reconstruct his daily walk which is recorded in many of the poems as possibilities on a map. Google maps and virtual art galleries, acts of minor vandalism, the insertion of a drip into the arm, a cat eating a bird, all find their way into the poems. Memory skips backwards, to bomb blasts, early attempts at writing, school days. A concern with the mechanics of writing is always present: the pen he’s using, the breaking of a pencil, memories of a typewriter, words and their possibilities.  Sounds too are included, like the phone and the doorbell, the post man interrupting him while writing, but unlike that person from Porlock, the interruptions kick the poem onward.

However, although the poems are separately titled, this is a sequence and the intelligence and craft are in the architecture and that may not be immediately obvious on a first reading.  The poems pick up, echo and alter words, phrases, and images. The more you look for the links, the more there are.

As a single example, which doesn’t exhaust its own possibilities.

The sixth poem in the sequence is ‘Nicholas Poussin, Landscape with a Calm 1650-1651’ . Although this is the first of three paintings by Poussin to be used as a title, the artist  appeared in the first poem, where his habit of reaching among Roman ruins for a handful of marble and porphyry chips and saying to a tourist; ‘Here’s ancient Rome’ stands at the beginning of the book as a short hand for Carson’s method.

The sixth poem also refers explicitly to the second poem, ‘Angela Hackett, Lemons on a Moorish Plate 2013’, in which, ‘a fortnight ago’ Carson had placed a blackbird to sing from a blackthorn ‘for the sake of assonance’. He’s driven to look up the difference between blackthorn and hawthorn. Which also evokes the tune ‘The Blackbird’.

But the poem also sets up what comes afterwards. Carson records his daily walk and for the first time mentions Number 1 Hopewell Avenue, ‘a beautiful house back then’ now a building site. The construction work here will become one of the markers of time passing as subsequent visits in later poems will record the developments on the site. ‘We’ remember the Goldfinch ‘you saw’ ‘two years ago’ and so on and so forth…You can pick up a phrase, a word or a detail and watch it move through the poems, threading them together.

The most obvious link is the movement of time, which is not straightforward. Time moves forward as an accumulation of present moments, some dated, some sequenced by incidents. Time moves backwards to memory, some also dated. What is most obviously missing are references to the future.

Time is also built into the complicated game Carson plays with the idea of the poem as a record of its own performance. The pictures might look like time frozen, but the poems often create the impression of a performance in progress, unfolding.

Perhaps the most intriguing aspect of the book, given the context, is that these poems manage to escape categories like ‘Personal’, ‘Autobiographical’ or ‘Confessional’. Just as a Carson poem can challenge your idea of what a poem is and does, these labels are called into question because the poems are paradoxically none of them, and all of them.

It’s easy to imagine someone else in this situation, not knowing if they were going to live, writing self-indulgent or embarrassingly personal poems. But here a craftsman is taking pleasure in his craft and inviting the reader to share his enjoyment.

Like the encounter with the man in the story, once you start paying attention, it’s hard to escape. The book invites rereading. Those possible etymologies of ‘dapper’ which seemed initially inappropriate are perhaps apt after all: the poems are indeed ‘powerful, strong, energetic’, ‘valiant, brave and bold’.