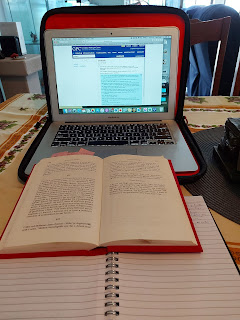 Buchedd Beuno: The Life of Saint Beuno. Edited by Patrick Sims-Williams for the Dublin institute of Advanced studies.

This was in the box of DIAS Medieval Welsh Texts I bought. I knew nothing about Beuno or his life, but it offered a break from working through stories from The Mabinogion.

I knew from reading Gerald of Wales that early Medieval Welsh saints are not to be trifled with. Beuno curses people who offend him or act badly, sometime bringing about their deaths, other times family misfortune. He also has the ability to stick severed heads back on decapitated corpses.

It’s been a very enjoyable few weeks in his company.

What I admire most about the life is the absolute minimalism of the story telling.

Here’s one episode; paraphrased, though my paraphrase is not much shorter than the text itself.

A young man, a workman, visits the court at of Ynyr of Gwent. He’s so good looking and well-mannered that everyone assumes he’s a noble. The King’s daughter falls for him so badly that she doesn’t want to live without him. The King, noticing this, decides the best course of action is to marry them before anything else can happen. So they are married.

Instead of living happily ever after, the happy couple set off for the young man’s home, with gold and silver and fine horses. But the young man has no home. When they stop to rest, the exhausted princess falls asleep. He is overcome with shame at the thought of his ‘homecoming’. His solution is to kill the princess while she sleeps and take off to the another royal court, where he uses the gold and silver to buy the office of steward.

Shepherds find the girl’s body and tell the Saint. He immediately goes with them, and reunites head and body. The princess is offered a choice: go home or stay here and serve God. She chooses the latter. Her brother turns up, and when she refuses to go home with him, he asks the saint to accompany him to the royal court to retrieve the gold and silver and horses. But when he arrives and sees his sister’s killer, he rushes at him and cuts his head off.

The king is outraged, and tells the saint that either he restore the dead man to life, or the brother dies. The saint does this. (This is the third time he’s done this in the story, but the first time when it’s not righting an obvious injustice.) The king apologises. The brother and sister and ex-husband disappear from the Saint’s story.

So much is left unsaid in the narrative especially at the beginning. Was the young man on the make? Does he pretend to be someone he isn’t or does he find it impossible to correct everyone’s mistake? When his new wife asks him, where do you come from, who are your family…how did he reply? Where did she think they were heading to when he ‘took her home’? How did she feel when she realised her head and been removed and then replaced?

By leaving it unsaid: it’s all there? Reading the story, there's a compelling invitation to speculate. But while it would be tempting to rewrite the story and fill it out, that would destroy the effect.