The Green Knight. (Film). A review of sorts 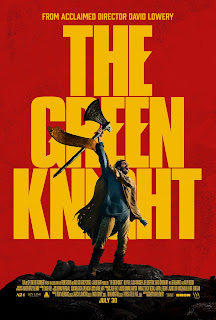 As someone who has opinionated about the depressing quality of filmed versions of Medieval stories, the hype surrounding The Green Knight was certainly exciting: art house meets medieval poetry.
Reviews were very positive, I think I read two five star reviews in the Guardian alone.
A medieval heart of darkness, a journey into the wilderness to confront the limitations of an ideology. They didn't say that, that's one way of thinking about the poem. Imagine what a young Herzog could have done with it.
So I watched the film twice as soon as it appeared on whichever streaming service it appeared on.
I liked King Arthur's accent.
Posted by Liam Guilar at 11:00 AM

Labels: Gawain and the Green Knight, the middle ages on film