So Mr Kavanagh, I did. In a city littered with statues, to the great, the dead and the fictional I went looking for the one your friends put up for you. Up Grafton street, where my dad and his brothers had a flat before the war, past St Stephen’s Green ("our local park") along Baggot street to the bridge. And there you are. 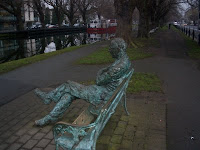 Names are important. As you knew they have their own melodic resonance.


“O Commemorate me where there is water
Canal bank water preferably, so stilly
Greeny at the heart of summer. Brother
Commemorate me thus beautifully
Whereby a lock Niagarously roars.”


You and me both.

I know water. Rivers, canals, estuaries. Spent years training on the canal in Birmingham, so I know how it goes green in summer, when you can learn slalom trying to avoid the bloated carcasses of dead dogs. So “stilly greeny” always worked. Was never too sure about naigarously but here, well, the sound of water falling though the lock is a beautiful constant and naigarously works. 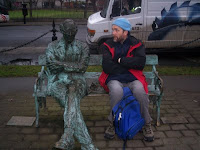 Mr. Kavanagh, it doesn’t matter to anyone but me, but you wrote several pieces that I wouldn’t be without. (You wrote a lot of bollocks too, if you don’t mind the observation.) I won’t bore you by naming them all, but long ago “Kerr’s Ass” moved itself into that odd space beyond any kind of critical possibility, where poems become old friends, or talisman’s, like Bloom’s potato.

Though “the straw stuffed straddle, the broken breeching’ has always tripped me. I love the incantatory quality of the details, and the way they build towards that magical last stanza which seems to slip into a different register:

…morning, the silent fog
And the god of Imagination waking
In a Mucker fog.

But before I start sounding like a critic I should point out I’ve recited those lines (did I tell you it’s one of the poems I carry round in my head) watching the morning happen on river banks all over the world, and in villages and towns from Sulawesi to Tashkent. So instead of the usual critical qualifications, I'm prepared to admit to an enthusiasm without bothering to qualify it.

Lady Godiva and me was partly inspired by a conversation Yeats is supposed to have had with Joyce. You were the historical irony of that conversation, the real rural deal tramping mud across Yeats’ carpet in your big Monahan clod hoppers. And perhaps the even greater irony was that the farmer poet ended up being the poet of city streets. Raglan road is just over there, isn’t it?

So I’m glad I got here. But your friends built this statue from metal. The day is hovering around freezing, so it’s not Kerr’s Ass that’s most on my mind. I’ll leave you to the water.
Posted by Liam Guilar at 11:45 AM