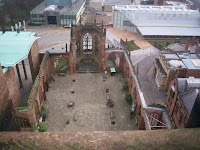 Urm. SO...the night of the launch...it's literally freezing. We get a taxi into town because anyway ...the taxi driver is acting very oddly. He draws up outside the house and watches us come out…doesn't open his door at first...Turns out, according to him, the new game in town is to rob taxi drivers, and to wait outside a residential address, pretend it yours, and then beat up the driver and run away....so he says: “if I do not see the door open, I do not take the fare.” And for the next ten minutes he tells us horror stories from the day to day life of a Coventry cabby.

Which is awful except…our driver is Asian, wears a turban, speaks with a thick Asian accent and he keeps denigrating "these migrants'. He’s not the first or last person we’ll meet who will repeat this incongruous refrain. I still remember the shock the first time I heard two Irishmen in Coventry talking about “these Bloody Migrants”.

Our driver, like so many other people we’d meet over a “certain age” keeps talking about the Good Old Days. You know the refrain? When it was safe and everyone was friendly and loving and gave each other flowers and chocolates not just before during and after sex but when they met as casual strangers cycling to work in the factories, a book of poetry balanced on the handle bars because everyone was so much more literate then than now…having left their doors unlocked because no one would dream of breaking in while granny was making her home made scones and little lullubelle was playing carelessly in the road with a host of snotty nosed but endearing urchins because pedophilia hadn’t been invented…...unlike these days when those bloody knife wielding migrants come and take our jobs and get our daughters pregnant.....I exaggerate a little...but it went on like that until it dawned on me that I was there in them good old days.

Back in de good ole days on the first night of my job as a barman I was told I could have bottle money: 26p in drink or takeaway. My friend who had got me the job, handed me a bottle of lemonade. I explained I didn’t like lemonade. He explained that given the route we were walking home, the lemonade would make a good weapon if we were attacked….back in de good ole days.
True, there were jobs, but have you ever seen a car production line before the process was automated? Or did he mean before I was born, when the Germans were dropping bombs on everyone?


One of the problems with travel is that you're at the mercy of other people's perceptions. You tend to rely on their version of the place because you have no version of your own to measure it against. Which is equally true of history. Trying to work out values and beliefs by reading the few remaining documents is a bit like trying to learn the road rules by watching how people drive.
Posted by Liam Guilar at 10:57 AM