Folks Long to go on Pilgrimage #2

A prelude of sorts:

December 2004. Looking for Keats' House. The usual family bargain: I'll do whatever you want all morning but this afternoon I'm going to Keats' house. Chris is getting exasperated with my habitual..it's round here somewhere, I'll know it when I see it. So she enters the newsagent.

So since we were in Exeter and I was looking at the map and saw the name...to Ottery Saint Mary we go to see Coleridge's...father's church. One of the benefits of accidental tourism is that you can take advantage of your own forgetfulness. I'd forgotten I'd seen pictures and read Holmes' description of the church. I was expecting a small Parish church, not a pocket cathedral. Betjamen's guide to churches did say it was impressive and the font was ugly. He was right. 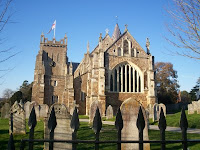 In an age where the blurb writers would have us believe every other poet is audaciously busy reinventing/renewing/reinvigorating the language, redefining and questioning what it means to be human, etcetc and blah blah blah it's easy to forget that once in a very long while there is a writer who does all those things, and more. STC was the man. It's difficult to imagine a history of English poetry that could leave him out. And he was the first, but certainly not the last, to waste his talent on surfeit of drugs and Wordsworth.

Although it has some memorabilia associated with STC he wasn't there. But if you could play it again Sam, what would you choose? Asra, the rising curl of Striding Edge, no misery despair or loneliness, at least no more than any other man lives through: or those poems and your place in history?

The question is rediculous. But so is wandering round a church in sub zero temperatures because some dead poet once lived there.
Posted by Liam Guilar at 8:35 AM