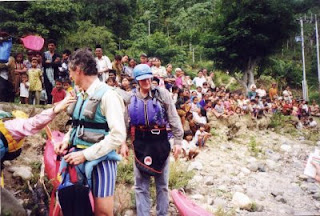 If you label Tom “a Voyeur”, you label him as perverse and criminal. But I think curiosity is a valuable human characteristic. And the V word blurs the distinction between extremes of behaviors.

The people lining the banks in the picture above have dropped what they were doing to come and watch the funny looking foreigners in their weird clothes. The FLF are about to begin Kayaking the Tripa river in Northern Sumatra. There is nothing perverse or criminal about their enthusiastic curiosity.

Traveling in Indonesia and Central Asia, you quickly learn that terms like private and personal are defined culturally and socially. It’s easy to forget that except for the very rich, it’s only in the past two hundred years in Britain that people have been able to afford the kind of buildings where different rooms are built for different purposes and you could expect to get through your day without someone seeing you doing something that today would be described as intimate or personal.

In some cultures curiosity is still seen as natural. In others, only certain types of curiosity are acceptable. And yet the English speaking world revels in a form of institutionalized voyeurism. Photographers with cameras stuck on a lens longer than my arm sit waiting for THE picture of the highly over paid human coat hanger. Look at the magazines on the rack. You pays your money and you get the juicy personal details and the "raunchy", "revealing".

But I suspect the act of writing presupposes certain types of curiosity too. Writers watch people. Over hear them. It’s about noticing little things and storing them away for future reference.
My version of Peeping Tom is that he’s curious. Not sick. Not criminal.

I’m no expert so I'm not sure where curiosity slips into Voyeurism, which is both a paraphilia and a crime. If you’re walking home at night and pass a naked figure in an open window, I suspect not taking a second look is an act of courtesy or repression. If you stop and watch, in the English speaking world, then you’ve consciously trespassed on a line we draw between public and private. Coming back the next day at the same time hoping to see the same thing is probably a sign of sickness, and having binoculars or your camera in your pocket would be inexcusable.

The issue of writing Tom was therefore complicated. It’s one thing to walk around in someone else’s head, and try to see his or her point of view. It’s harder to do it when the border lines between understandable and repulsive are so vague.

Watching I understand. Curiosity I understand. But voyeurism? Especailly the high tech, premeditated kind? When the landlord is accused of having drilled holes into the bedroom he’s just rented out to a couple so he can install cameras, or when a man is arrested and found guilty of having pin hole cameras in the toes of his shoes, so he can take pictures up women’s skirts and then publish them on the web, we’ve come a long way from curiosity, and something sinister and intrusive is happening.

So far in fact that “up skirting” and “down blousing” are not only ugly new words but ugly new crimes, and moves have recently been made in Australia to acknowledge them as such and make sure there are punishments in place.

Tom watches Godiva riding past. In my version, he’s not a voyeur. But I'm not sure the distinction works.
Posted by Liam Guilar at 6:47 PM