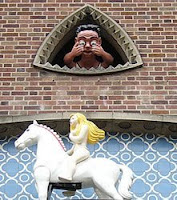 One of the attractions of writing poetry about a historical subject is that you’re writing poetry not history. You can wander through areas where a lack of qualifications is no problem, and make links which no rational historian might accept. I extended that privilege into the world of the paraphilias: Voyeurism and exhibitionism.

Peeping Tom is a later addition to the story. He first appears in the 16th century, although the voyeuristic element has been introduced in earlier versions where it was Leofric who was perversely enjoying the sight of his wife.

The savagery of Tom's punishment feels as though we have slipped sideways into Grimm’s grimmest. Several commentators have pointed out at that he acts as a scapegoat to displace the charge of voyeurism. The man looking at the painting, the reader imagining the story, is not Peeping Tom, is not guilty. The picture is of a nude, not a naked woman, the viewer looks with the educated gaze of the connoisseur. The story of the ride is a tale of courage and compassion, not a work of pornography.

What the commentaries don’t do is reflect on how the arrival of Tom changes the story and shapes the image of Godiva.

The most powerful woman in your world is going to ride past. Naked. Do you look, or turn away.

Tom’s act shifts the story so that Godiva is suddenly worth looking at. So much so that he jeopardizes the deal. Godgifu, was short or tall, thin or fat. For all we know she had a face like the back of a shield wall. Enter Tom, and suddenly Godgifu becomes Godiva, becomes an object of desire. Just as people create ideal versions of people they don't know well. No longer an individual; an inhuman ideal.
Posted by Liam Guilar at 11:38 AM