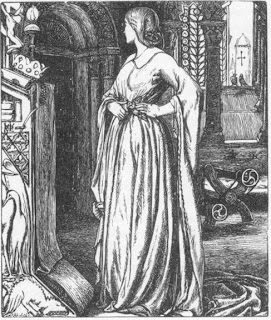 The story most people know is the one Tennyson tells in his poem of 1842. (I’ll return to the poem, and its own peculiar version).


The poor of Coventry complain to Lady G that they are starving. Moved by pity, she asks her grim and heartless husband, Earl Leofric, to lift the taxes. He refuses. She nags him. Exasperated he says “I’ll lift the taxes if you ride naked round the city”.
Before she does this, she does a deal with the townsfolk. They will stay off the street and keep the windows shut while she rides round, clad in nothing but her hair.

One dastardly individual, a tailor called Tom, tries to bore a peep hole so he can watch her riding past but his eyes are blasted, in Tennyson’s version by “the powers”, and fall out before he gets to see her.
She rides round the city, returns, and Leofric lifts the taxes.