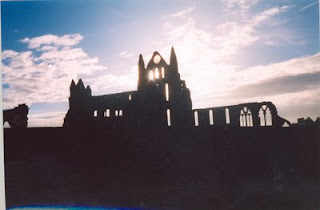 You could be forgiven for looking at the town of Whitby in Northern England and thinking someone had realised an ideal of a fishing village. It looks like a post card. The houses clutter the steeply rising slopes on either side of the narrow estuary. A ruined abbey stands out on the headland, refusing to be assimilated into the modern sprawl. The fishing boats still go out from the working harbour, passing the replica of the Endeavour and the boat rides, both closed for winter when I was there. Its tune is the rhythmic creaking of the wheeling gulls, punctuated by the venting brakes of tourist coaches.

What you look for in Whitby shapes what you see. For the lover of gothic fiction, this is where Bram Stoker brought Dracula ashore. Go up the “hundred steps” to St Mary’s church and you too can wander where Bram happily recorded names and dates from the grave stones that hadn’t been eroded by the salt gales. If you come from Australia, there’s Captain Cook and the Endeavour. There’s a whaling history and a boat building history. There’s the famous abbey where the synod decided when Easter should be and how monks should cut their hair. There’s even a Cafe that boasts the best fish and chips in Great Britain. But if you’re interested in English poetry, this is where Caedmon first sang his famous “Hymn”.

For the past ten years I have been obliged, professionally, to read, discuss, and teach a thing called “literary theory”. But perhaps perversely, I cling to the idea that real people write poems for reasons that are real to them. They often do it in specific places and there is something to be gained by going there.

On the day I went to Whitby, the Abbey was locked. According to the brochure, on the days the abbey is open to the public, there are actors dressed as historical characters who “interact with the visitors”. Twenty years ago, had I met Caedmon, I would have interacted with him by throwing him over the cliff. I would have probably been canonized by all those students who bruised their patience against the most famous piece of Old English Poetry besides Beowulf. Not that the hymn is long; at nine lines, it’s a mere doodle by OE standards. Nor is it difficult to translate. The frustration comes from the fact that nothing you can do will make those nine lines look “interesting” in modern English. “Professional” attempts at translation, Paul Muldoon’s for example, suggest the piece is little more than a list.

So this is a long winded story, in several parts, about how I gave up trying to translate and learned to love the thing itself.
Posted by Liam Guilar at 10:16 AM