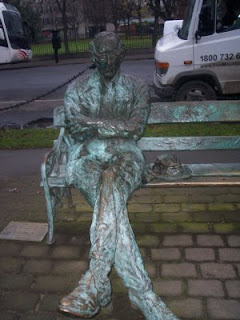 No, not something Freudian, Kavanagh’s poem which I have been rereading. Digression first and second.

If I ask the musicians I know who they listen to or admire, they recommend performers and performances. If I ask them who they think is the greatest exponent of their instrument, chances are they will give me a list. It’s a recognized part of the learning process.

Ask people involved in poetry the same question and a lot of them start hedging their bets. (I don’t mean the bizarre “I only write poetry, I don’t read it” crowd. I mean those well-read practitioners.) You want to know their idea of “Major poems”, well, first define major? “Great poets”? Define great. And so on and so froth. Yes, we know literary values are contingent. Thank you. But if you can’t admit to your enthusiasms and hang your hat somewhere, then something is amiss.

So ”The Great Hunger” has to be “One of the Twentieth Century’s Major Poems”.

I have met Maguires. They were the self-contained characters who sat in the corner of rooms. The guy who came into the bar and drank three pints, never four, never spoke to anyone other than a few words and a nod. There but distant. And I knew the married versions, those men and women who had traded isolation for the possibility of “Living alone in half as much space” (Ralph Mactell’s line that). Silent men home from work, hiding down the garden shed. Bedrooms glimpsed in friends’ houses where there were two single beds in the parents’ room. The sense, even as a child, that some strange negotiations must have gone on for the engendering of children.

So why isn’t it touted as such?
Is it that you have to read it several times to notice how good the imagery is?
Is it that it is so uncomfortable to read? Kavanagh focuses squarely on his main character and traces his inexorable slide towards age and loneliness. The unrelenting misery of that life is unnerving as we watch it get wasted by forces beyond its control. The contrast between the cycle of growth in the farm and the frustrations of Maguire’s sterility never let you slide into the comfort of abstractions. Reading the Waste Land there is the release of feeling you’re not really sure what you’re reading but it sounds good. The Great Hunger is inescapably about a human being and his life. And I think that’s what makes it grand. And maybe because Kavanagh was accessing his own fears and couldn’t get the distance on it for flippancy it has a clout that his other attempts at long poems lack. The verse flies like a tattered sack on a bit of rusty barbed wire.

And you can’t help but think: “there but for the grace of God…”.
Posted by Liam Guilar at 8:48 PM