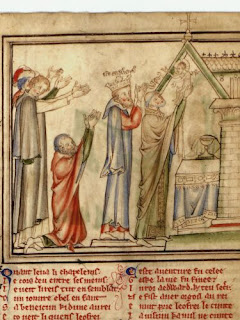 The picture shows Leofric, kneeling and present at one of King Edward’s miracles. It’s not a portrait in the modern sense. More “Rich Anglo-Saxon male at prayer”.
Both Leofric and Godgifu were remembered as being pious and generous benefactors to religious institutions.

One of many great moments of researching Lady G was the discovery that she and her husband donated a reliquary containing the arm of Augustine of Hippo to their new foundation at Coventry. Good research opens up doors you didn’t know were there.

The idea that part of the writer of the Confessions etc ended up IN Coventry of all places is almost comic. The fact that Leofric may have been given it as his reward for his help in Edward’s raid on his mother’s treasury, given the status given to mothers and Grandmothers in Lady G, is my irony, not history’s.

Augustine is one of the great deniers. According to him four things vexed the mind and should be avoided: Desire, Joy, Fear and Sorrow. There were three sins: The lust of the flesh, the lust of the eyes, and the ambitions of the world. Doesn’t leave a lot untainted. And you can see why people used to say that Catholics didn’t believe in life after birth.

The writings of a man who may not have been quite right in the head by modern standards had such an effect that over a thousand years later it was still shaping the way I was expected to behave from primary school onwards. That intrigues me.

Why is history the record of the followers of the great deniers and their attempts to impose their moral bleakness on the rest of us? Juxtapose a naked body and the long reach of a dead man’s withered arm. Why is the withered arm the default choice for so many?
Posted by Liam Guilar at 3:22 PM

I found your blog by searching for Geoffrey Hill's lectures - they are a tour de force and birlliant.

I would encourage you to read some of Augustine again. He is one of the most poetic early christian writers and does not deserve the reputation he has for being anti-sex/body/materiality. He has an incredibly moving passage in City of God on how much he loves this world, humanity and beauty (City of God 22.24).

There is also that part of him that is a "denier" as you put it, but he was a lover at heart and never lost the fire and passion he brought to life.

Great blog, Liam. Keep up the search for truth and beauty.
-seth