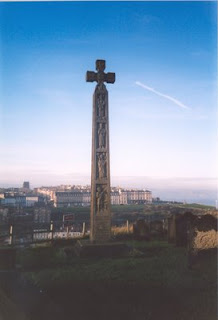 While you can play endless games with the packaging, the hymn itself seems to resist most attempts to deal with it. If this is the cornerstone of the anthology that is “Poetry in English” then it is rough hewn and refuses to be conscripted to the service of anachronistic reading practices or assimilated to later “schools of poetry”. Like the ruined abbey, it has an essential awkwardness that doesn’t see the need to apologise.

Approaches to Caedmon, whether to his story or his hymn, usually carry more than a whiff of anachronism. Older commentaries judge his Hymn by comparing it to what it isn’t. While not central to the “miraculous “ nature of the event, at the edge of most interpretations, the adjectives “illiterate’ and “unlearned/ignorant” are lurking, waiting for an invitation to attach themselves to “cow herd”. The assumptions that the literate have a monopoly on composition, or that there is something inimical to creating poetry in being a ploughman or a farmer, are both snobbery. In an oral society, literacy is an irrelevance, if not an actual impediment. And “learned” is a loaded judgment. Caedmon probably knew a great deal more about keeping cattle than most Anglo-Saxon scholars. He obviously knew a great deal more about Anglo-Saxon poetry “on the pulses” than they do. (One of the great exceptions to all this is Seamus Heaney’s poem Whitby-sur-Moyalla )

But then so much of our literary history and criticism is tangled with politics and snobbery. The reading practices and pleasures refined by reading what students were taught to appreciate, became an objective standard to measure something completely different. Readers who know no Greek or Latin will still accept, on a trust founded on nothing but tradition and snobbery, that there is something wonderful about a poetry they can only access in translation, no matter how flat and banal those translations appear. They are ready to believe that a tedious story in which a bunch of juvenile thugs, interacting with some “Gods” who wouldn’t pass a maturity test in a primary school, argue over a brutalized girl, before lots of people are killed, is an undying “classic of world literature” while Beowulf is an incoherent children’s story about monsters and Caedmon’s hymn is a poor poem.

Like some of the stranger places I’ve stayed in on a journey to somewhere else, Old English has rarely been more than a compulsory stop over on the high road to Chaucer and the Renaissance. These days it’s not even that. Where I work, the journey starts with Shakespeare, and you either take the ruined bypass to the Romantics or find all the road signs are down and no one seems to be able to give meaningful directions.

We had hired a car to drive to Whitby. For some reason we were ”upgraded’. It was the kind of vehicle I’d only seen behind plate glass. The hire company had kindly forgotten to include the driving manual. We got there and back, but I never did find out what all the buttons were for, or what I could have done with the beast. It’s the same with Caedmon’s poem. We simply don’t know how it was “read”. Whatever the original subjective experience, it is lost to us. Reading it like a modern poem, looking for balance and irony and paradox, may be one way of driving the beast, but I’d be willing to bet that wasn’t what its original operators did with it. Trying to use a chair as a bicycle is a frustrating experience.

Twenty years after I’d hurled Sweet’s Anglo Saxon Primer against the wall, I stumbled over Caedmon’s poem in a totally different context and learnt that spoken aloud, the original sings. Inveigled into reciting it as part of a concert to commemorate St Hilda’s day, I stepped up to a microphone, feeling incredibly stupid, and began to recite the hymn. Echoing back on the sound system, in that strange stretched pause that follows the end of a piece of orchestral music, I heard its music fill a packed concert hall. Something I had dismissed as trivial reasserted itself as worthy of notice. Translated, it doesn’t work. In the original it has a supple, carved resilience.

It is also a poem about something; a criticism that can’t always be leveled at modern poems. It reminds us that irony isn’t the only game in town, and to a modern reader used to the “post modern/post romantic” games poets use to hedge the lyric /I/, there’s something almost confronting about the total absence of self-effacement. There’s no knowing wink to the audience, no attempt to have it both ways by saying one thing and suggesting you don’t really believe it. If you were living in the seventh century, there would have been so many forces trying to efface you that not helping them was probably sign of a healthy survival instinct. Reading backwards, its easy to forget that Christianity was not the dominant hegemonic force it would become. People were still dying in Britain for belief. If we live in a relativist universe, then Caedmon lived in one where belief systems were clashing, not metaphorically, but on the battle field.

Perhaps the hymn’s only real ambivalence is that it is devotional without being denominational in any obvious way. There’s no sense here of a message hermetically coded for a small group of cognoscenti. Instead there’s something obdurate and durable. There’s celebration, but also the sense of someone leaning into the wind. Belief then, as now, was an act of exposure. Just as the Abbey sits on a hill top jutting into the sea, the poem forces itself forward to assert its presence. Not only does Caedmon use the first person, he uses the first person plural. There is the implicit assumption that he not only speaks for himself to others; he speaks for others as well. The poem is an invitation to express what the poet assumes is a sentiment his immediate audience can share. It has more in common with the compulsive rhythms of the old mass book; belief organised into metrical units of memorable words I can still recite thirty years later; than the introspective games of some modern poems. 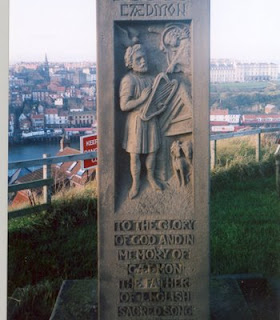 At the top of the hundred steps (which aren’t actually a hundred) there’s a fake Celtic cross. Under Hilda, there’s a carving of a man with a harp of sorts and the words: ‘To the glory of God and memory of Caedmon, the father of English sacred song”. Given the quality of some Medieval religious lyrics, and of some of the hymns that have been written in English down the years, it’s not a title anyone could find embarrassing.

So perhaps, coming to Whitby wasn’t such a waste after all. (And yes, the fish and chips were very good). We were lucky. It was one of those rare winter days when the North Sea is a flat reflection of a deep northern-blue sky that looked like it would shatter if you touched it. You don’t need to be conventionally religious in any denominational sense to realise the “spirituality” of the place. You can imagine Caedmon here, watching spring, after the long winter, the first flowers on the headlands bringing colour back to the world, and see why you’d praise God the maker.
Posted by Liam Guilar at 9:12 AM